Organisers of the school strike for climate estimate 300,000 people turned out in more than 100 cities and towns

Hundreds of thousands of Australians took to the streets on Friday as they called for greater action on the climate emergency in more than 100 cities and towns across the country.

Organisers of the school strike for climate claimed about 300,000 people attended dozens of rallies, including an estimated 100,000 in Melbourne and 80,000 in Sydney. The unprecedented climate crisis protests were likely the largest public demonstrations in Australia since the marches against the Iraq War in 2003.

“I fight for climate justice because everyone deserves a safe future,” 17-year-old student Niamh told a crowd that spilled out of a Melbourne park and into the city streets. “The government is not supporting it yet, but together we will change that.”

Sparked by the first climate striking student, Swedish teenager Greta Thunberg, the protests have grown into a global movement. In Australia, they have garnered support from the wider environmental movement, but also from other non-profits and charities, unions and some businesses.

Friday’s crowds doubled the size of the student strikes in March, organisers said. Protesters ranging in age from toddlers to the elderly chanted slogans such as “we are not drowning, we are fighting,” and held up signs and placards.

Many were personally critical of the prime minister, Scott Morrison, who is currently in the US to visit Donald Trump. Morrison drew criticism this week after confirming he would not attend the United Nations Emergency Climate Summit in New York.

In Sydney and Melbourne, there were long lines to enter the rallies, which brought parts of both cities to a halt. Throngs of students, families, mums with strollers, officer workers and unionists filled Sydney’s Domain to hear from protest organisers, Indigenous students, Pasifika activists, and union leaders.

Moemoana, 18, had come from Wollongong to the protest, and her homeland is Samoa.

“I’ve come to fight for the Pacific,” she told Guardian Australia in the crowd.

“Seas are rising and it’s affecting Pacific Islands, especially Tuvalu and Kiribati, it’s a real threat and Australia needs to know that Pasifika are neighbours and Australia really needs to help out.”

Marlie Thomas, a Kamilaroi high school student from Gunnedah, said she was attending the rally on the authority of her elders, not the department of education.

“I’ve had to help collect bottled water for our family in Walgett,” she said, about the western NSW town which has run out of water after rivers dried up.

About 35,000 people attended a protest in Brisbane. Across Queensland, climate strikes had a very direct local message to match the ambitious global demands of protesters: a stop to the Adani Carmichael coalmine and action to save the Great Barrier Reef.

Large crowds turned up in places torn between coal basins and the Queensland coast in places like Mackay and Townsville, which have mineworkers’ jobs and a tourist industry at stake.

“We strike because our future is in their hands,” said Brisbane year 12 student Morgan. “Our very existence sits precariously on the shoulders of politicians who care more about whether almond milk can be called milk than they do about climate change.” 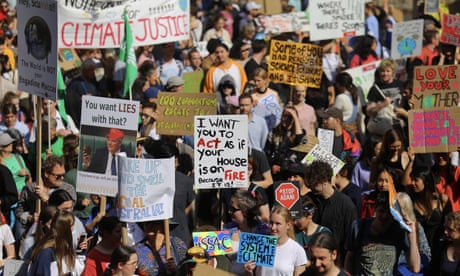 Signs of the times: the best Australian climate strike placards

In Melbourne, where the protests coincided with the last day of the school term, the rally packed out Treasury Gardens and spilled onto Spring Street, where the state’s parliament sits.

“I feel like there isn’t going to be very much of a future, or if there is, it will be very short unless we do something,” said Michaela Pam, 15, who took the day off school to attend.

But the Coburg High School student told Guardian Australia of the large crowds: “It makes me feel really happy. You get a little bit of hope.”

Melbourne organisers Niamh and Freya, 16, told the crowd the protesters did not blame those who worked in the fossil fuel industry for the climate crisis.

“We understand the role fossil fuels have played in putting food on the table for families,” said Freya. “It’s vital we all work together, not against one another. It’s not about jobs versus the environment.”

Large numbers also gathered in Australia’s other major cities. Organisers estimated about 15,000 attended a strike in the capital, Canberra, while there were about 10,000 people at rallies in both Perth and Adelaide.

First Dog on the Moon

Organisers in Tasmania said 22,000 people attended an event in Hobart. Bob Brown, a former leader of the Greens and a giant of the environmental movement, said the crowds were larger than those during protests against the Franklin Dam in the 1980s.

Students and protesters also gathered in smaller centres, from the beaches of Byron Bay on Australia’s east coast to the outback towns of Alice Springs and Katherine. In the Queensland town of Chinchilla, a lone striker, Ariel Ehlers, 12, staged her own strike.

Universities said they would not penalise students who missed classes to attend, while the Uniting Church synod for NSW and the ACT also allowed their students to strike. Catholic and Anglican church-run schools as well as NSW public schools said students should remain in class.

The acting prime minister, Michael McCormack, said the rallies should have been held on a weekend so they didn’t disrupt businesses, schools and universities.

Source of the notice: https://www.theguardian.com/environment/2019/sep/20/hundreds-of-thousands-attend-school-climate-strike-rallies-across-australia