Many refugees have fled to Libya from other war-torn countries, hoping to find respite from the violence at home. But their hardships have been far from over upon reaching the North African country, itself beset by conflict.

A number of Sudanese refugees spoke to Middle East Eye about their experiences since reaching Libya, as they have been repeatedly displaced by armed conflict and a lack of accommodations.

A group of Sudanese nationals, including newborn babies and pregnant women, have been living for several months in an abandoned warehouse in an area of Tripoli known as al-Riyadiya, after the United Nations High Commissioner for Refugees (UNCHR) and other humanitarian organisations failed to find them proper housing.

Before the warehouse, most had been staying in schools or mosques, with others sleeping in open fields or abandoned buildings. (MEE/Sara Creta) 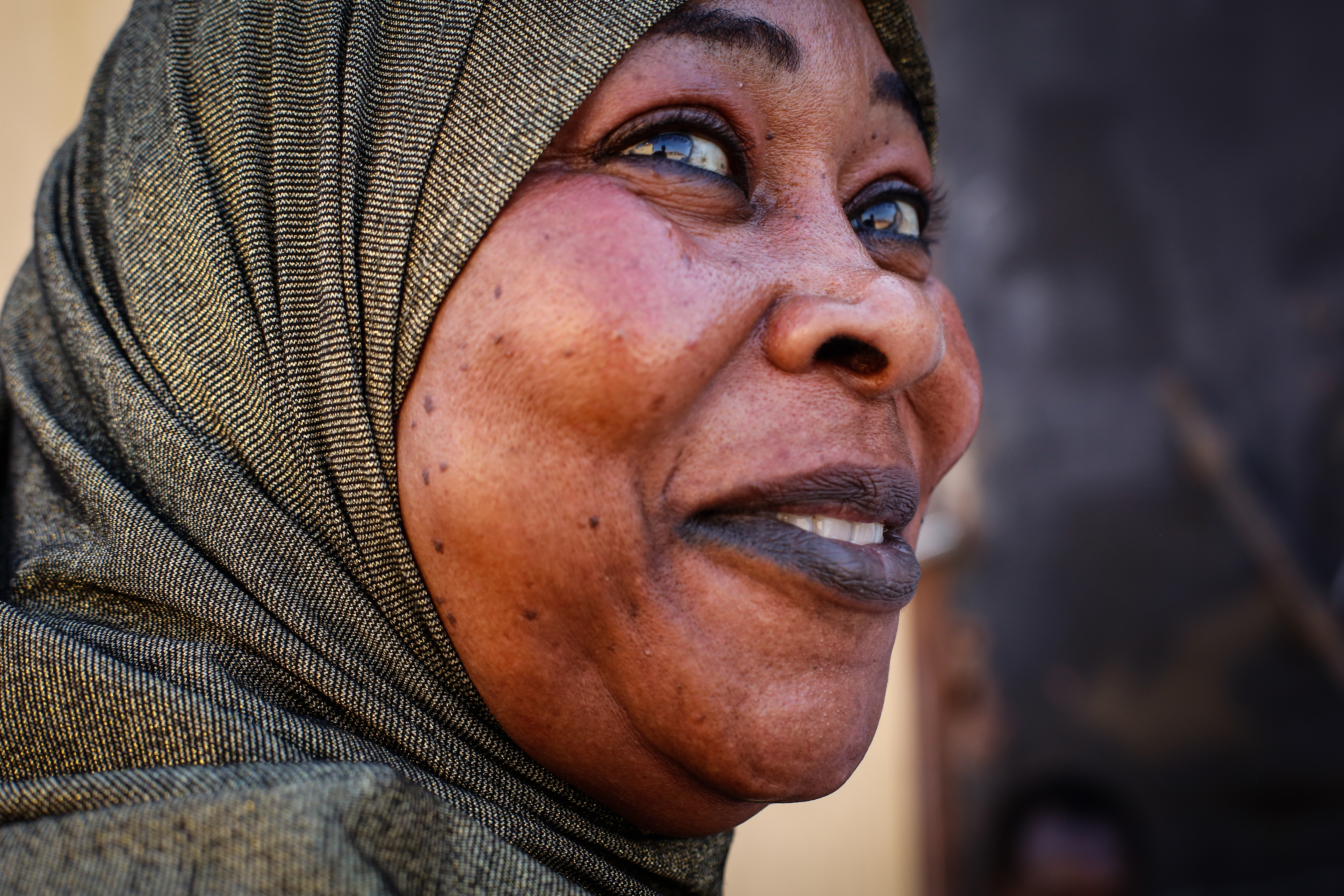 Nafisa, 42, escaped genocide in Darfur, only to be displaced multiple times.

“My husband and two sons were set on fire, and my third son, Tayib, has survived and fled with me in Libya,” she told MEE. “We left Sudan into Chad before crossing the border and making our way to Umm al-Aranib, a town in Libya’s southern desert,” she said.

“There, my son Tayib was tortured: he was chained and burnt until we managed to collect money for his ransom.” (MEE/Sara Creta) 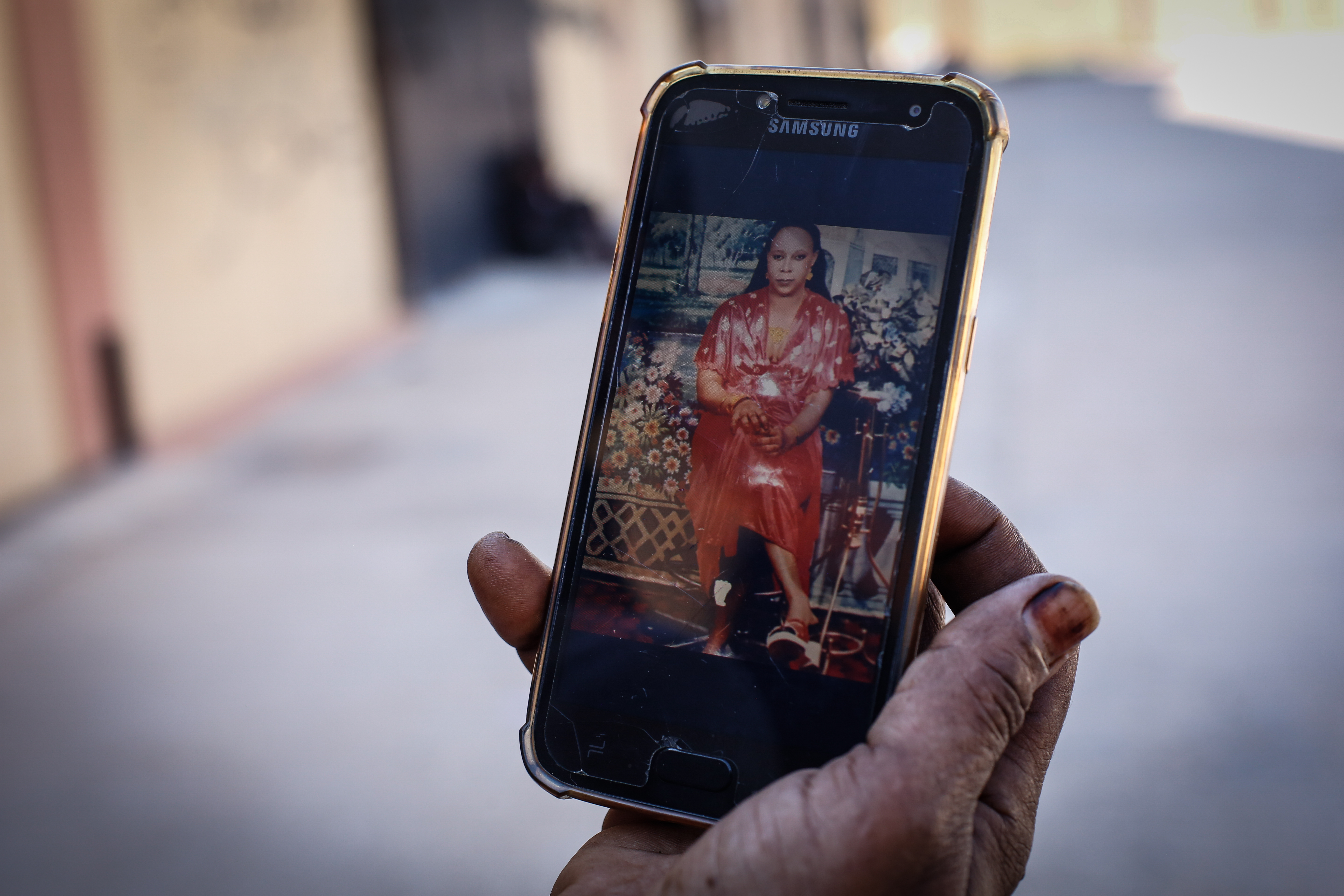 Nafisa said her son Tayib’s torture and humiliation lasted for two months, and stopped only after a sum of $3,500 was collected for his release.

“We decided to leave for Sabha and we searched for a trustworthy Libyan to take us to Tripoli,” she said.

Afterwards, Nafisa and her son initially found shelter in Ahmed bin Shatwan, a school that has been converted into a displacement camp run by the Libyan Red Crescent (LRC).

But a quarrel erupted between Sudanese refugees, an Iraqi refugee family and the shelter manager on 23 June. Meanwhile, armed groups raided the facility at night.

“They drove into the school’s courtyard and fired bullets in the air. We even saw weapons being exchanged at night,” Nafisa said. “The militia were trying to recruit my son. Even now I’m still afraid for his safety.”

It was only afterwards that her family and other Sudanese were moved to the warehouse. (MEE/Sara Creta) 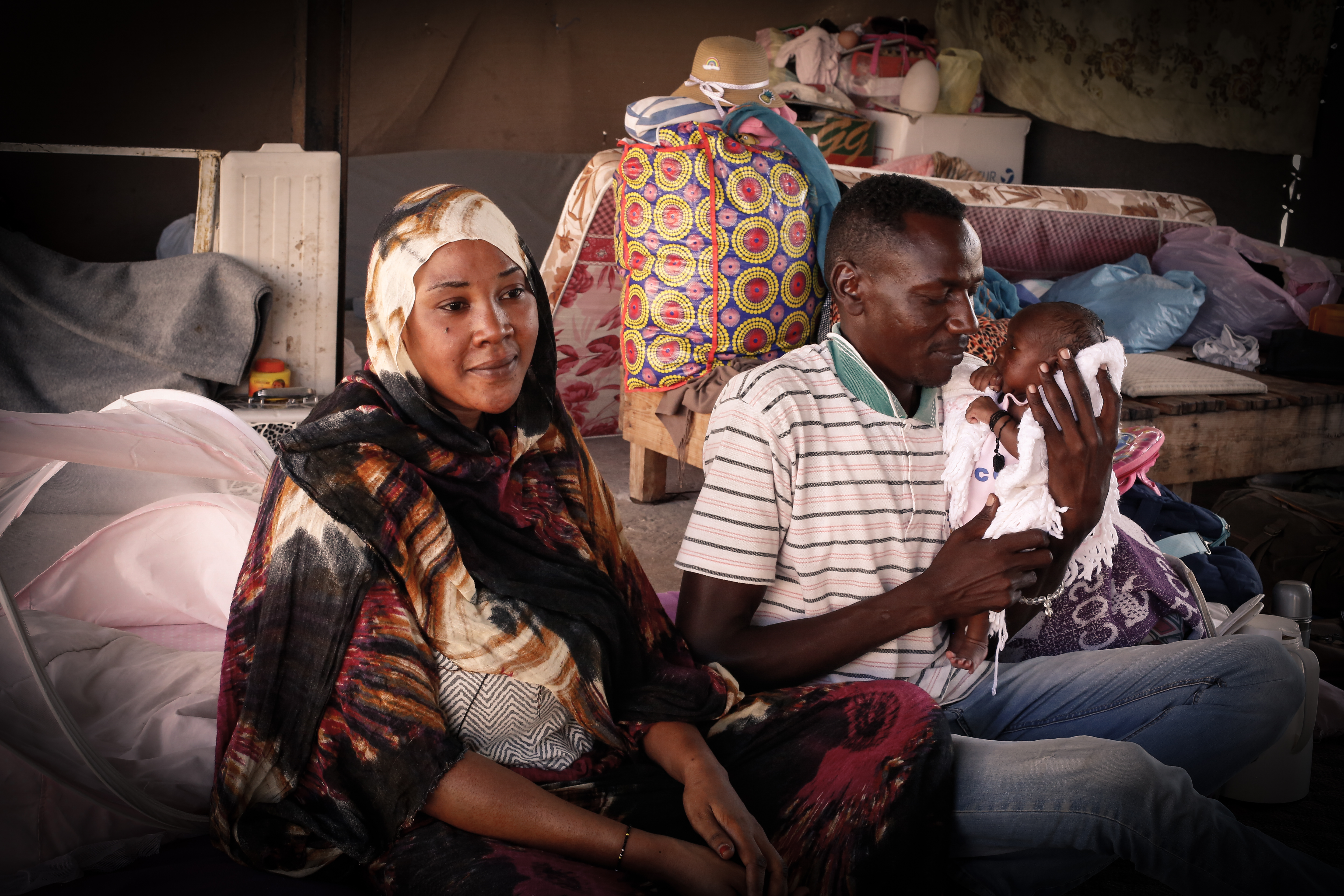 Fatma Aroun Mansour and her husband Abu Bakr Adam are both from Darfur. They arrived in Libya in 2016 and lived in the town of Murzuq. But after recent clashes in the southwestern town, they decided to move to Tripoli.

They first stayed in Qasr bin Ghashir, 25km south of Tripoli. But when violent clashes erupted between forces of the internationally-recognised Government of National Accord (GNA) and the Libyan National Army (LNA), they had to leave their house and then found themselves in the Ahmed bin Shatwan school in Dhara. Like Nafisa, they felt forced to leave the school last June and have since been waiting for a more permanent solution.

“We are registered with UNHCR but we do not receive any support. My husband cannot work safely in Tripoli as he doesn’t have any legal documents, and can get kidnapped any time,” said Fatma. “We don’t get any financial help and each time we ask for financial assistance, we get told to wait.

“I had a Caesarean delivery and I’m exhausted. I don’t know how we can survive in this situation. I don’t even have milk for my children.” (MEE/Sara Creta) 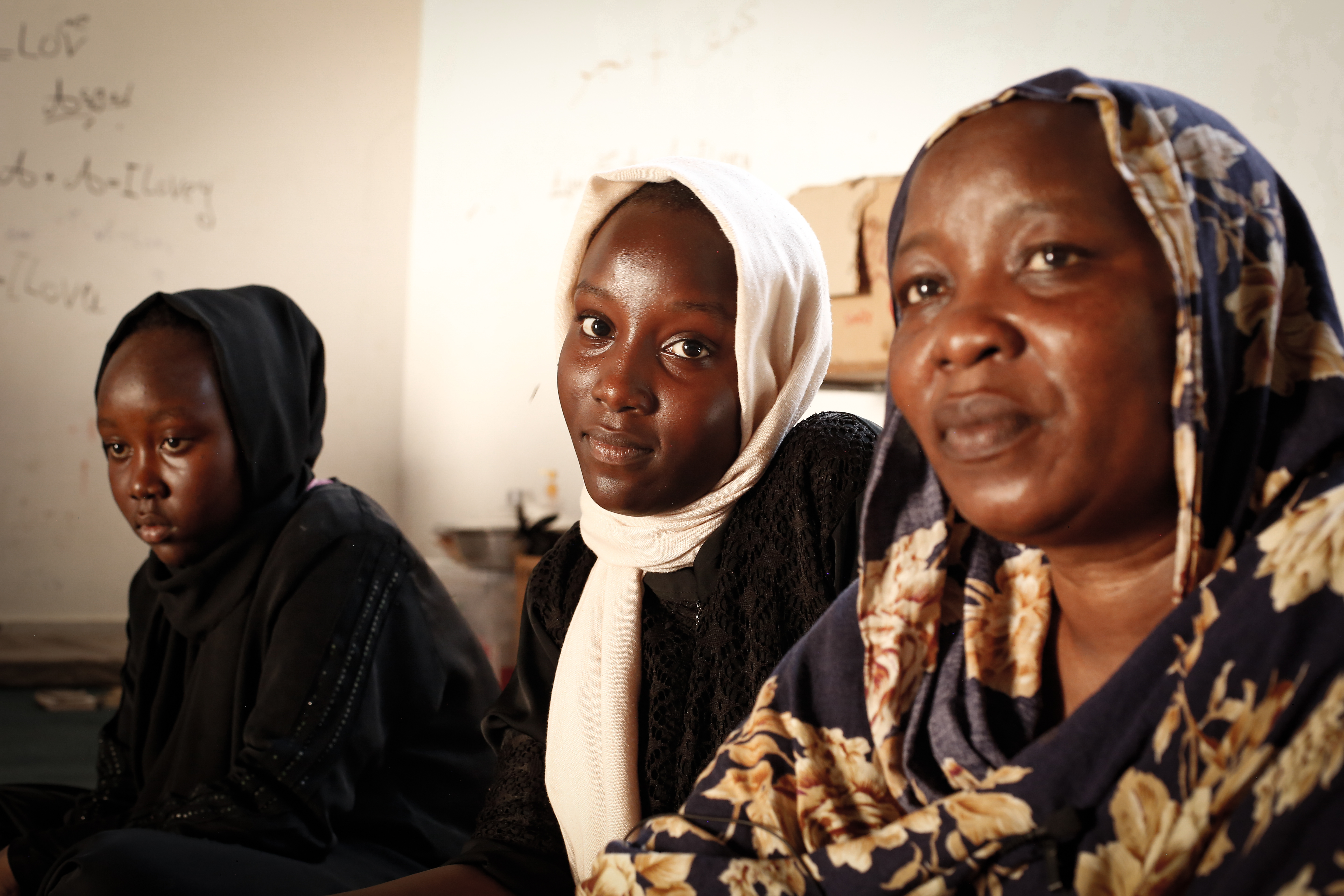 Asjad, 15, her mother Awaya Mohammed, 51, and sister Abak, 13, came to Libya from Sudan through Chad.

“When we fled to Libya, we had to cross the Chadian desert. We arrived in Kufra, then we continued to Ajdabiya,” the teenager said. “At the checkpoint, my mother was captured by an armed group and they kept her for 12 days before we were able to collect money to secure her release. When we arrived in Tripoli, we fled multiple times due to the insecurity.” (MEE/Sara Creta) 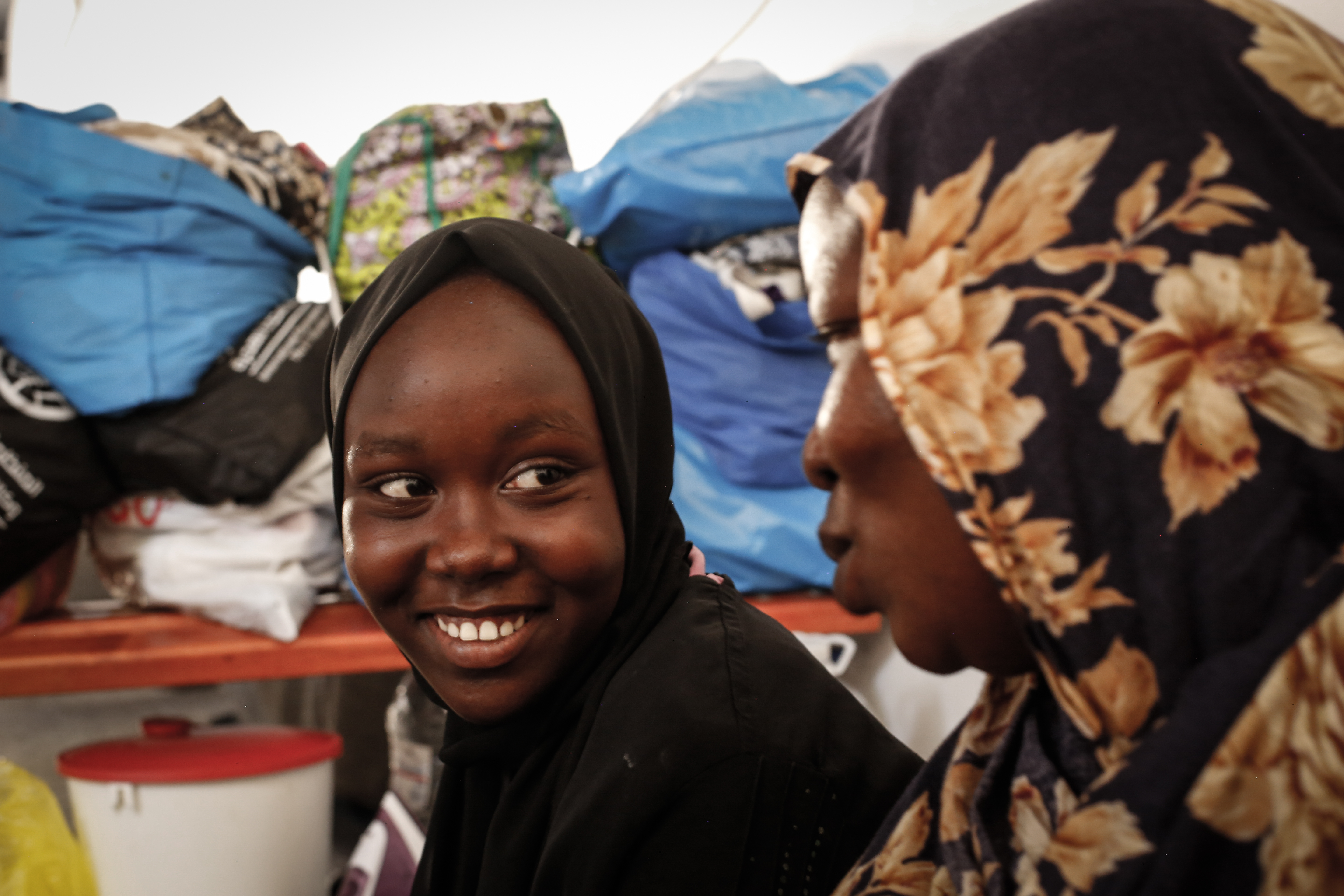 Awaya said all that she wants is her daughters’ safety and for them to obtain an education.

“Due to the situation in our region in Sudan, we can’t go back,” she said. “My husband mysteriously disappeared in 2013 and I don’t know if he’s still alive. I cannot go to work and leave my daughters alone. I’m so scared that something would happen to them.

“We need safety, stability and a future. I’m also against genital mutilation and I don’t want my daughters to return to Sudan so they don’t go through the same ordeal I faced.” (MEE/Sara Creta) 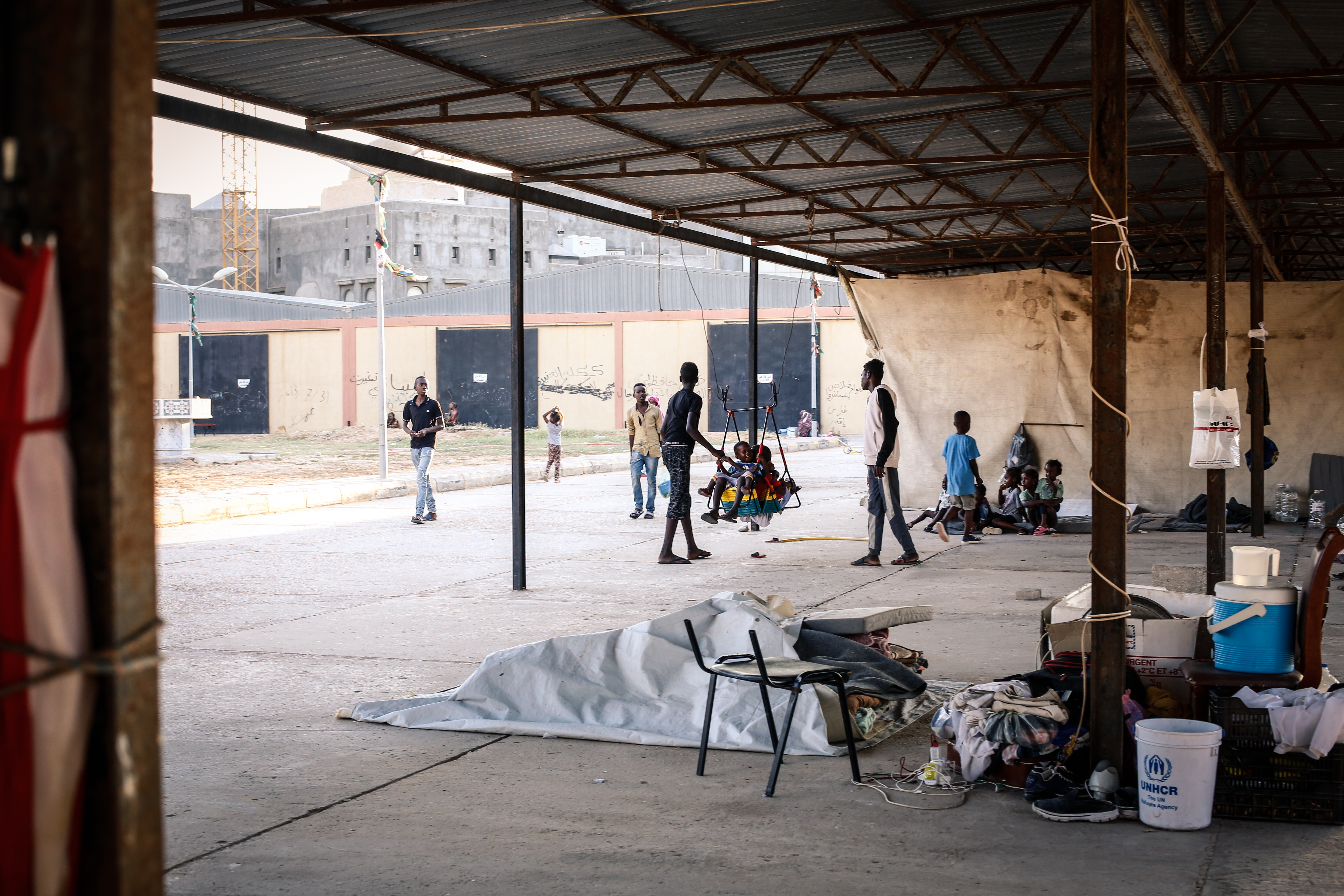 For two months, families of refugees have lived in this abandoned storage facility located some 400 metres from the UNHCR’s Community Day Center (CDC) in Gurji, waiting to be moved to safer housing.

With mats on the floor for beds and neighbours’ kindness as their sole source of food and water, their living conditions remain dire. “When we go to sleep at night, we don’t know if we will wake up in the morning. We often hear fighting all through the night,” said Nafisa. (MEE/Sara Creta) 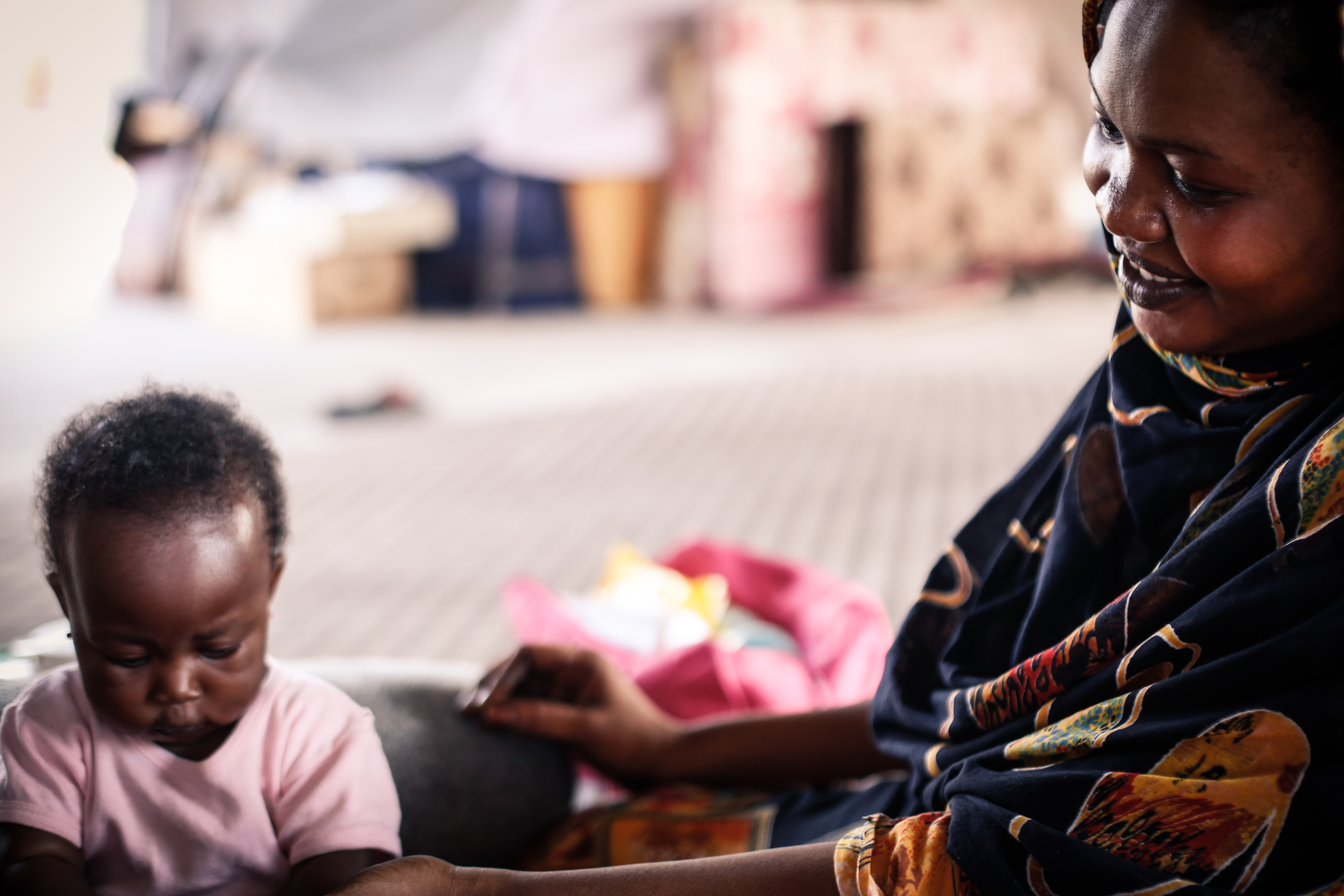 Naima, 31, and her then-4-month-old daughter came to Libya in 2013. She initially worked as a nurse in a hospital in Tripoli.

“Our problems started in 2017 when my husband was abducted for the first time,” she told Middle East Eye, saying he was held for six months.

“A few months ago, while I was pregnant, he got abducted again and I couldn’t work anymore. After I gave birth, I moved in with my sister-in-law, but where she lived was very unsafe. We were saved by our neighbours who drove us out of there,” Naima said. Her youngest daughter was only seven days old when they arrived at the Ahmed bin Shatwan shelter.

“I don’t feel safe here with my two daughters. I really don’t know what to do.” (MEE/Sara Creta) 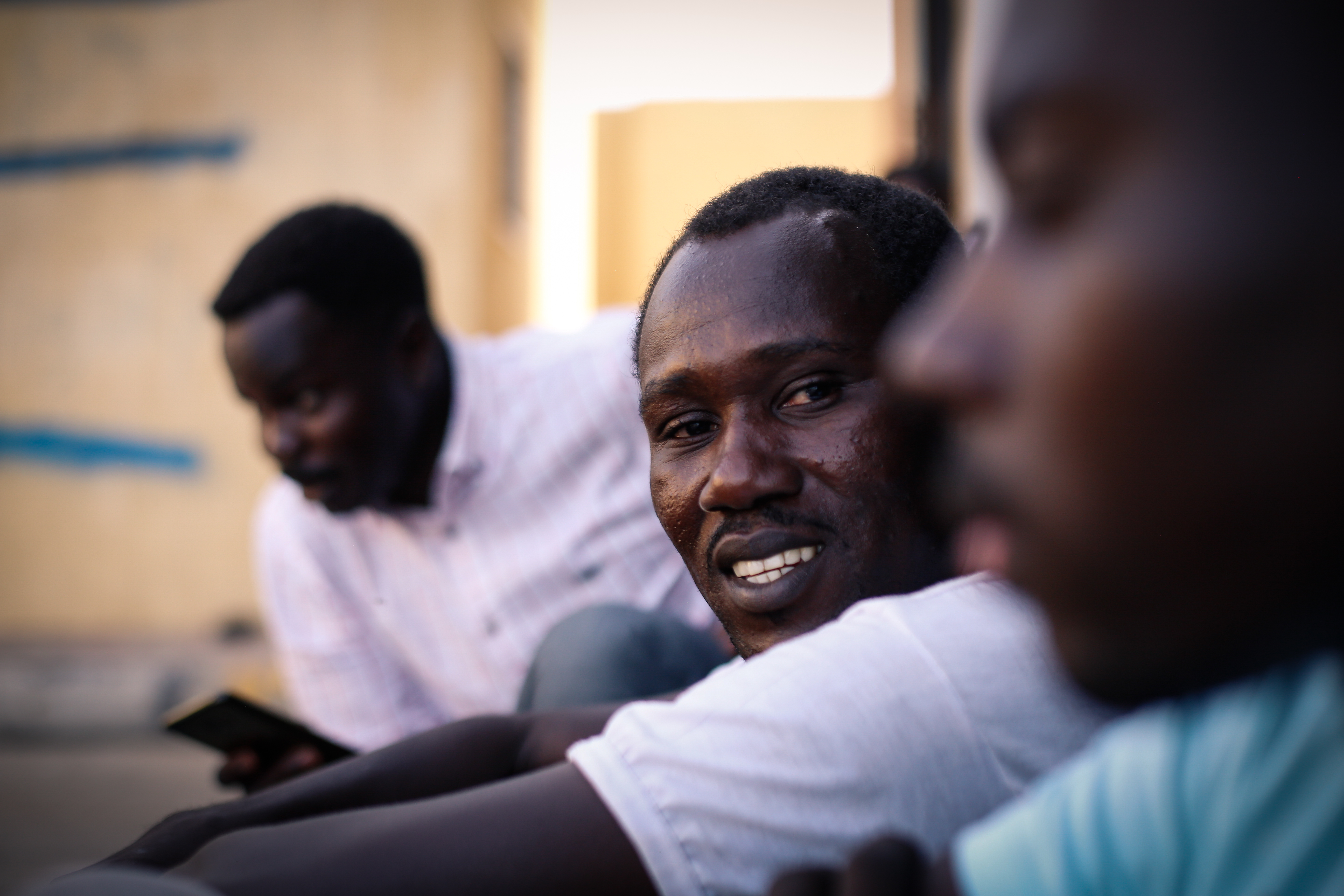 “In June, while I was on my way to the UNHCR office, I was captured by a militia at a checkpoint and was brought to Tajoura detention centre with four of my friends. I had been in the centre for seven days when air raids struck Tajoura on 2 July,” he recalled.

“We were inside the bombed hangar. We hid in the toilet before we were able to escape. My ribs were broken. They brought us to the hospital where many of us were injured and one of my friends died,” Mussa said.

The young Sudanese man said he has been requesting support from UNHCR, to no avail. “I have been trying to contact UNHCR and ask for shelter, but they sent me away. Some people may have been able to work and pay rent, but now with the war, it’s more difficult and unsafe. We risk being kidnapped or forcibly recruited by militia.

“Many of my friends have gone missing,” he said. “This is not a life.” (MEE/Sara Creta) 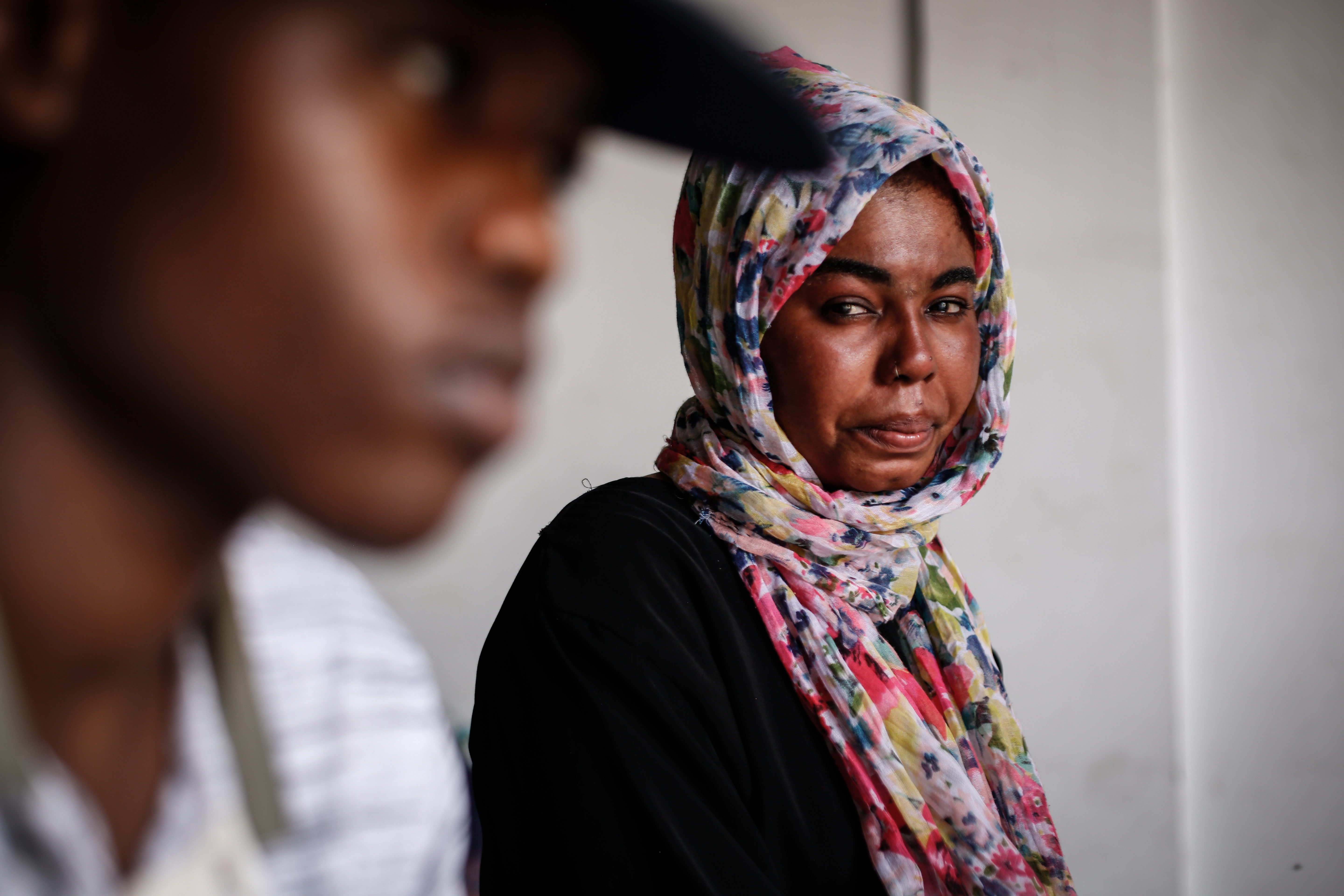 She tried to cross the Mediterranean with her brother when they were stopped by the Libyan coast guard.

“They arrested us and brought us back here,” she said. “They kept us in detention for six months, after which I paid money to be released. I arrived in Tripoli with my brother and the only place we found was this shelter. We are afraid here and we can’t sleep at night. We just want safety, security and education. Our lives are destroyed.” (MEE/Sara Creta) 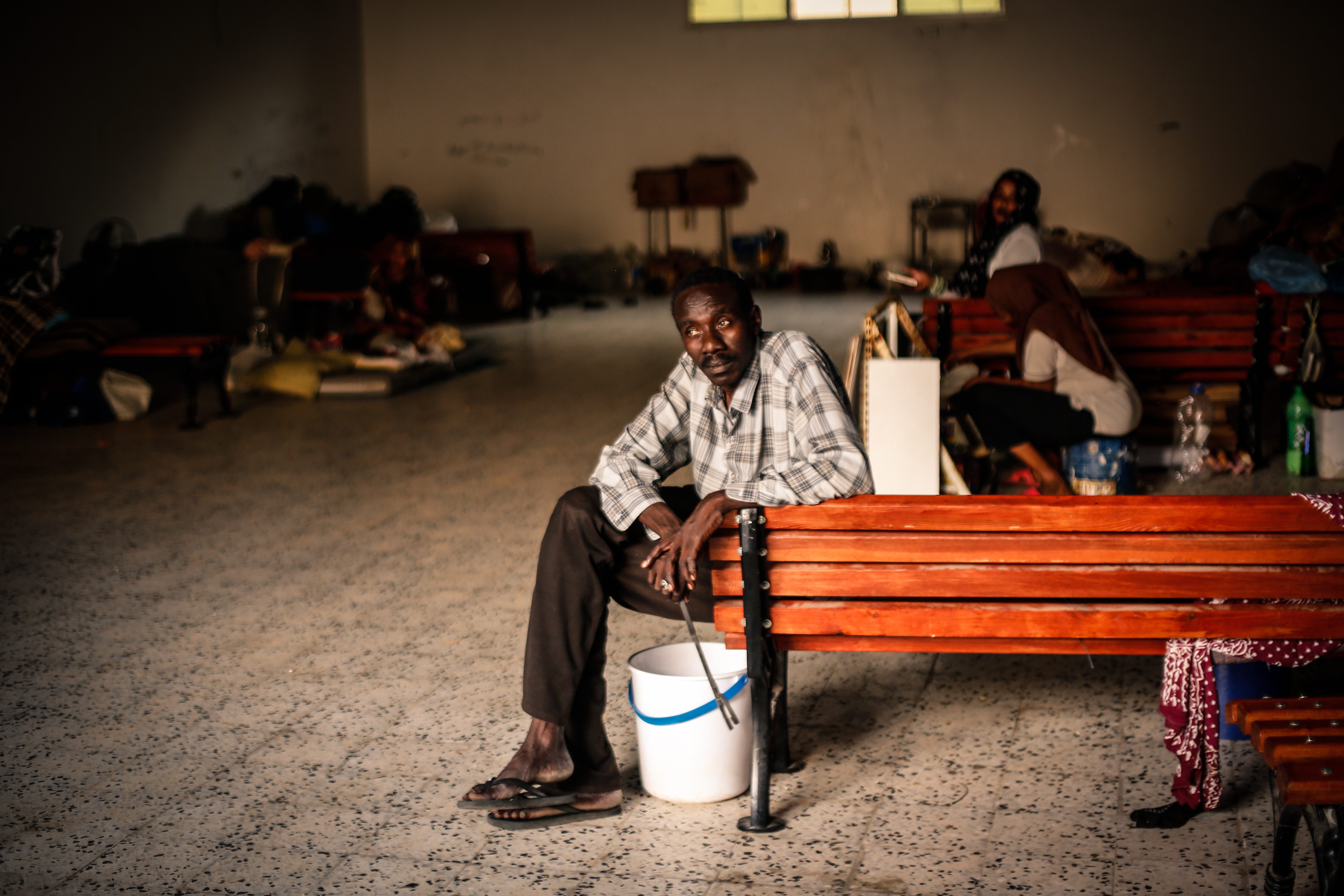 Suleiman is the father of seven children. His youngest son was just only a few months old when the family crossed the Sahara desert into Libya. They were among the many families that were driven out of the Ahmed bin Shatwan shelter. Like the rest, they have been awaiting assistance in the abandoned warehouse for two months. (MEE/Sara Creta) 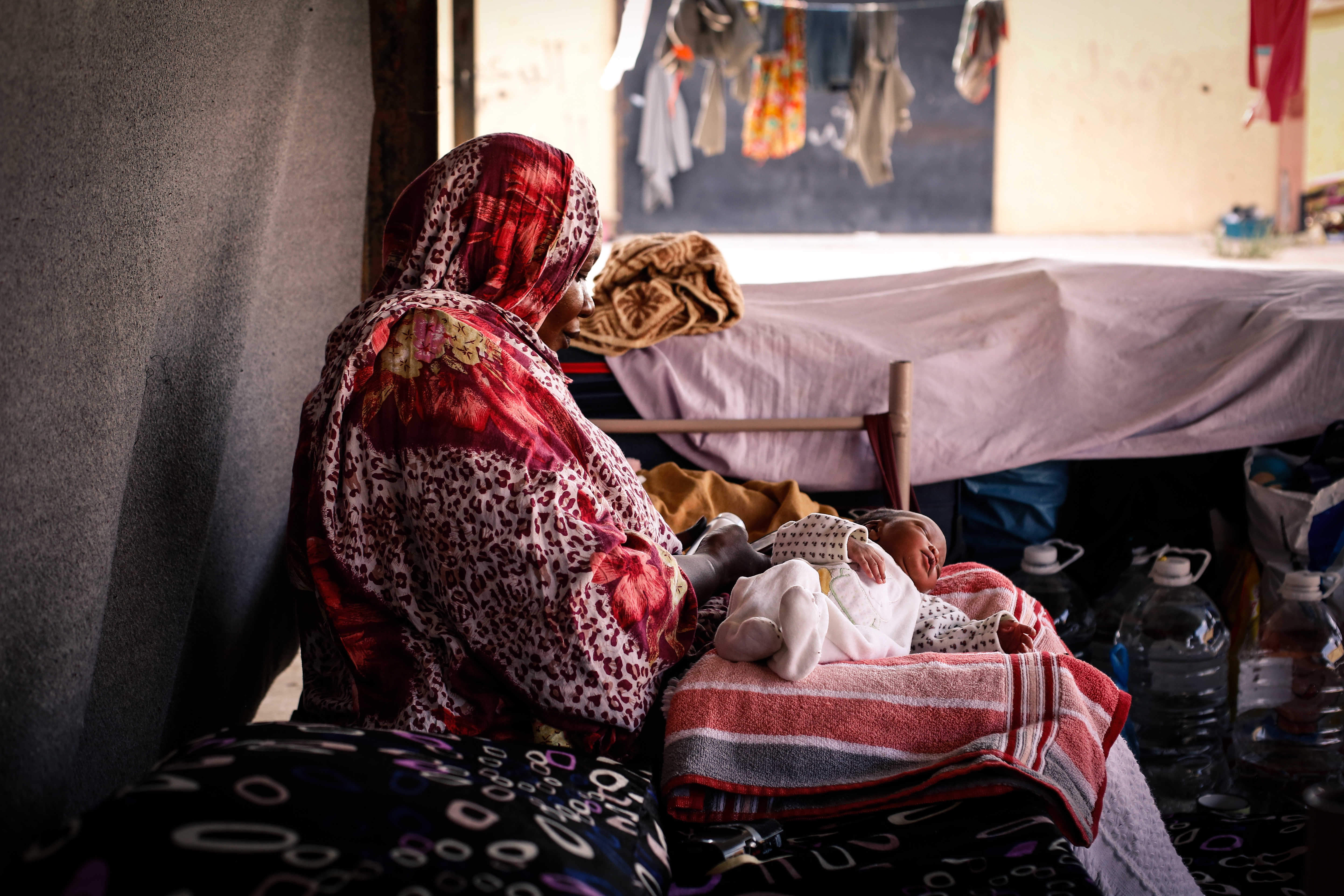 Muna gave birth a few days ago and had just been discharged from the hospital with her newborn baby.

“My family faced many difficulties before arriving in Tripoli, especially during our journey to the city. My husband was kidnapped in Ajdabiya but managed to escape one month later. We lived in the Crimea district of Tripoli, but when the war broke out, we were forced to leave our house. We stayed in the Ahmed bin Shatwan school-shelter until this issue escalated,” she said.

Like other refugees at the warehouse, Muna said she is not receiving any support. “I don’t have any support for my baby. Nothing at all from UNHCR.” (MEE/Sara Creta) 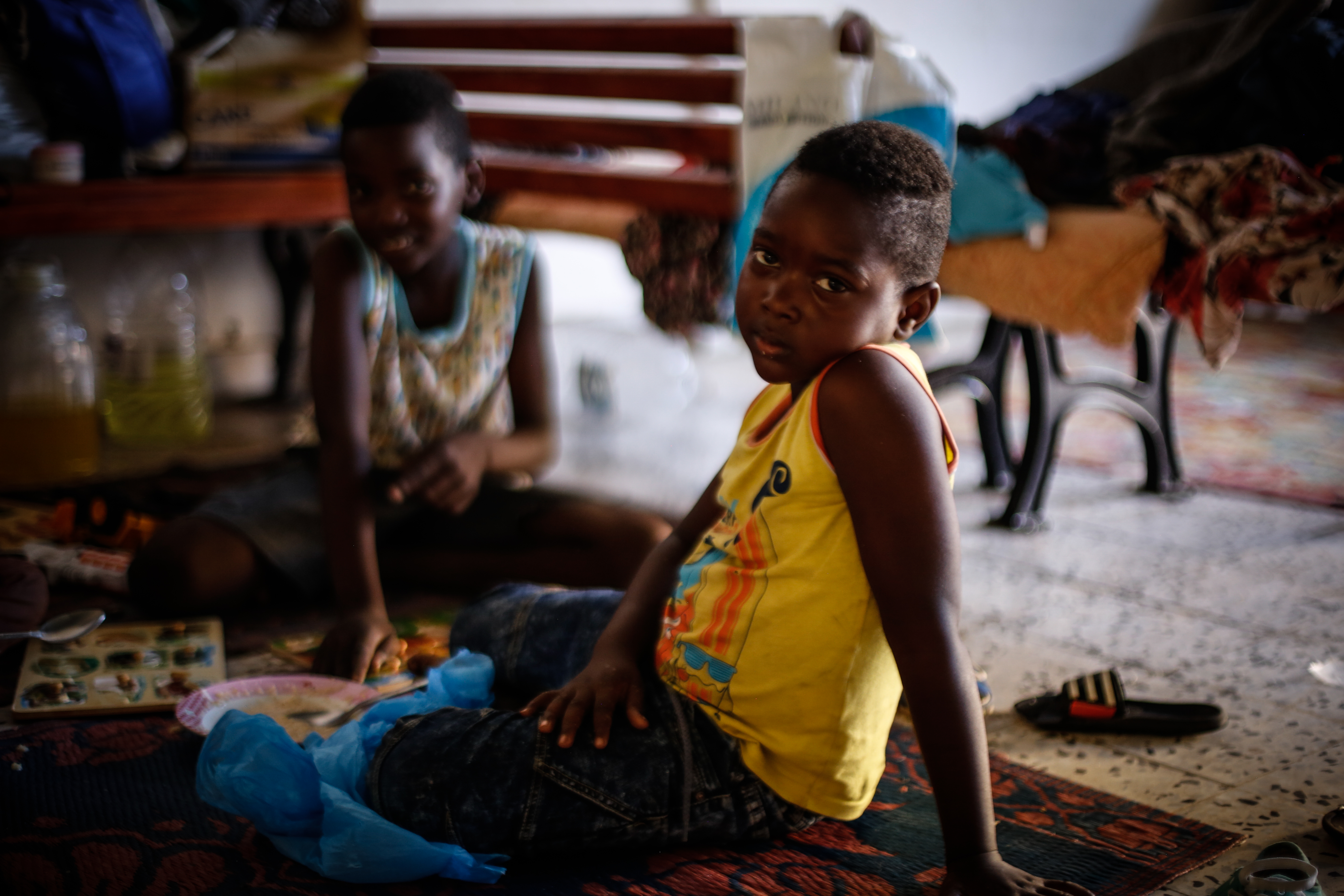 With most families having now been displaced multiple times, the future is uncertain for the Sudanese in Libya. Many children and their parents are reportedly dealing with the psychological ramifications of displacement, loss and grief.

“I have no future in Libya, and the region where I grew up in is gone,” Nafisa said, her words echoing the sentiments of others in the warehouse. “We need safety.”

The families are now facing a new challenge. Only a few days ago they were asked to leave the warehouse. They have nowhere to go. (MEE/Sara Creta)

Source of the article: https://www.middleeasteye.net/gallery/pictures-refugees-left-no-haven-abandoned-warehouse-libya