From a ‘lose the booths’ conference to ‘warm-strict’ policies, teachers are divided on how to tackle unruly pupils

The use of isolation booths in state schools has become one of the most contentious issues among teachers in England, even if public concern over pupil behaviour has faded from the headlines since the 1990s.

Social media has become an almost nightly battleground between teachers with conflicting views on behaviour management and the use of internal exclusion or removal rooms within schools, where disruptive pupils are taken out of class and sent to study elsewhere under supervision. 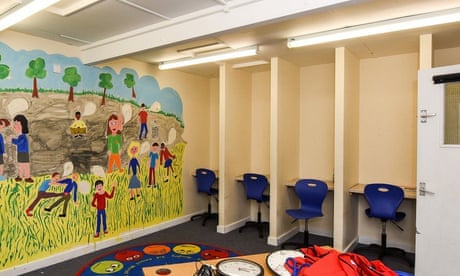 What the debate reveals is that the more than 20,000 state schools in England have wide variations in discipline and behaviour policies.

In some cases pupils are sat at booths, similar to cubicles used in call centres, with a desk and three high sides. It is the use of this furniture that has become controversial within the profession, to the extent that a “lose the booths” conference for teachers is being held this weekend in Leeds.

“Learn how to remove the booths from your school and still have great outcomes,” says the publicity for Lose The Booths Live!, which promises a conference with “children’s rights at heart”.

But in practice the use of “consequence rooms” or removal spaces, is just one potential tool in a school’s armoury. While some regularly use internal exclusion as a formal policy for misbehaviour, others reject it – highlighting the autonomy enjoyed by headteachers.

At one end of the scale are schools practising “warm-strict” behaviour management, which their critics deride as “zero tolerance”, with clear rules and sanctions. Those rules can be at a level of detail some parents may find disturbing: not only the lengths of skirts or type of shoes but also maintaining complete silence when moving between classes, and sanctions for what some regard as petty issues such as failure to bring a pen to class, or not keeping eye contact with the teacher during lessons.

But the defenders of this approach, including schools such as the Magna Academy in Dorset or King Solomon Academy in Paddington, say that a well-structured behaviour policy is liberating for teachers. By cutting out the background buzz of what the former Ofsted chief inspector Michael Wilshaw called “low-level, persistent disruptive behaviour”, the whole class can then concentrate on learning.

One maths teacher who moved to a recently opened “warm-strict” free school said he was astonished by the difference a successful behaviour policy can make.

“I’d worked at four schools before, but this is the first time I’ve been actually able to teach for the whole lesson. At the other schools pupils would arrive making noise and jostling, and take five or 10 minutes just to settle down. Here there’s none of that,” he said.

But on social media teachers regularly spar over the need for such detailed rules and sanctions for what in other, more relaxed schools would be minor infringements.

There’s little in the way of research to say which approach is more effective in terms of pupil behaviour or academic attainment – although supporters point to the strong GCSE results produced by the Michaela Free School in Brent, one of the flagships of the stricter approach.

While it is impossible to say if pupil behaviour has improved in recent years, statistics show that the rates of expulsions from state schools are well below their peaks of the 1990s. In the 1993-94 school year, more than 12,000 pupils were permanently excluded. By 2017-18, the latest year for which we have figures, just 7,900 were permanently excluded, although the proportion of pupils being excluded has been rising slowly over the previous five years.

But many teachers remain unconvinced by the stricter approach. The most recent annual conference of the National Education Union held a hostile debate over zero tolerance policies, with one delegate labelling the use of booths as “inhuman”, while others blamed budget cuts for the loss of school support staff.

But union surveys have also found that many teachers feel unsupported by their school’s management over tackling bad behaviour, with behaviour frequently cited as a key reason for leaving the profession.

The Conservatives went into the most recent general election vowing to improve school behaviour, seeing it as a vote winner. Its policies included giving school inspectors extra time to examine bullying and behaviour, while documents obtained by the Guardian before the election showed the government preparing to “back heads to use powers to promote good behaviour including sanctions and rewards” including the use of “reasonable force”.

Source of the article: https://www.theguardian.com/education/2020/jan/17/behaviour-battleground-isolation-booths-divide-opinion-among-teachers