The wisdom and knowledge of indigenous people in Guatemala is central to the realization of the 17 Sustainable Development Goals or SDGs, targets agreed by countries around the world to end poverty, maintain peace and preserve the health of the planet. In this blog, the UN Resident Coordinator in Guatemala Rebeca Arias Flores explains how sustainable development is not new, but simply a new name that draws on ancient wisdom that is renewed with each generation of indigenous people.

“Now more than ever, we must heed the wisdom of indigenous peoples. This wisdom calls upon us to care for the earth so that not only our generation may enjoy it, but that future generations may as well.” 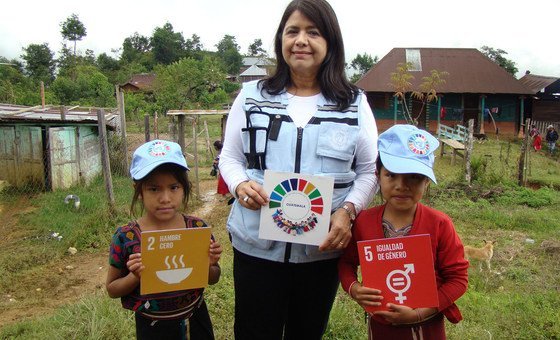 This wisdom is passed down to us through stories and spirits. Consider the example of Nawal, a supernatural spirit of harvests that can take on animal forms, according to Mesoamerican beliefs. On certain days in the indigenous calendar, people call on Nawal for a good harvest. It is a fine thing to have one good harvest. It is even better for the earth to yield its bounty again and again. To enjoy such repeated success, farmers in the area know they must respect the seasons, to plant, to sow, to let the land lay fallow for a time.

This wisdom was also articulated in a declaration from 2012, on an auspicious date in the Mayan calendar. It was Oxlajuj B’aktun or a “change of era,” the end of a cycle that lasts more than 5,000 years. On that date, the three UN entities working with indigenous peoples came together in Guatemala, their first joint meeting outside the UN’s New York headquarters.

This wisdom found its way into “K’atun: Our Guatemala 2032”, the national plan which has guided sustainable development of three successive administrations. It serves as the compass for the country’s UN Cooperation Framework for Sustainable Development 2020-2024, created in collaboration with the Government of Guatemala.

To pursue K’atun, we must look at the status of indigenous peoples. In Guatemala, they are amongst the most vulnerable people because they are constantly displaced from their ancestral lands. Data from recent years show that the poverty rate among indigenous people was 79 per cent, almost 30 points above the national average. Even before the COVID-19 pandemic eight out of every 10 indigenous girls, boys and adolescents, live in poverty. Only six finish primary school, only two go to secondary school, and one goes to university. Six in 10 indigenous children under five years of age suffer from chronic malnutrition.

COVID-19 is devastating for all of Guatemala. Many people are sick, some are dying, and countless others are losing their livelihoods because of the disease itself and because the quarantine prevents them from working and earning money.

However hard the pandemic hits Guatemala, it will hit the indigenous peoples even harder. They were already the furthest left behind, and now they will be set back even more. The situation of indigenous women, who are often the main providers for their families, is even more worrisome.

And yet, indigenous people are seeking their own solutions, drawing on their own ingenuity. They are using traditional knowledge and practices to contain the disease.

But we must also do this for the sake of all Guatemalans. All of Guatemala, indeed, the whole world, has much to learn from indigenous peoples. It is a painful irony that they have been so exploited and oppressed, and yet they may hold a key to our collective survival. It is a painful irony, too, that indigenous people are among those most affected by climate change, and yet they contribute the least to it.

75 years ago, the signatories of the United Nations Charter reaffirmed “the dignity and worth of the human person.”

Now, let us reaffirm that belief once more. And let us ensure that indigenous people are included in it.”

The UN Resident Coordinator, sometimes called the RC, is the highest-ranking representative of the UN development system at the country level. In this occasional series, UN News is inviting RCs to blog on issues important to the United Nations and the country where they serve.
Fuente de la Información: https://news.un.org/en/story/2020/08/1070862
Comparte este contenido: