Angels and artillery: a cathedral to Russia’s new national identity

Angels hover above artillery, religious images are adorned with Kalashnikovs and the Virgin Mary strikes a pose reminiscent of a Soviet second world war poster. The imagery inside Russia’s vast Cathedral of the Armed Forces blends militarism, patriotism and Orthodox Christianity to breathtaking and highly controversial effect.

An hour’s drive from Moscow, the cathedral has a metallic, khaki-green exterior, topped with golden domes and crosses that rise to 95 metres (312ft). Inside is the largest amount of mosaic of any church in the world, with many of the work depicting battles from Russian history and the second world war in particular.

During Vladimir Putin’s two decades in charge of Russia, the Soviet victory in the Great Patriotic War, as the second world war is still called here, has gradually become the main building block of a new Russian national identity. Now, the war victory has its own religious shrine, and when future historians look back at the Putin era, they may well decide that this cathedral is its defining building. 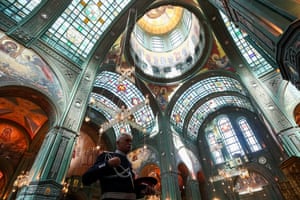 A member of the armed forces attends a service in the cathedral. Photograph: Valery Sharifulin/TASS

Soviet war medals are rendered in stained glass on the ceilings, while mosaics show various key battles. Symbolic numbers have been coded into the dimensions – the diameter of the main dome, for example, is 19.45 metres. Trophy weapons and tanks seized from the Wehrmacht were melted down and used in the creation of the cathedral’s metal floors.

“Think of this as you step into the cathedral. As you walk across the floors, you are symbolically delivering a blow to the fascist enemy,” a guide told a tour group of older women in headscarves as they entered the building earlier this month.

The cathedral was the brainchild of Russia’s defence minister, Sergei Shoigu, and the opening was originally planned for the 75th anniversary of victory over the Nazis, in May. In the end, owing to the coronavirus pandemic, the ceremonial opening was delayed until June. Shoigu, Putin, and the Patriarch Kirill of Moscow attended the opening, on 22 June, the anniversary of the Nazi attack on the Soviet Union in 1941. 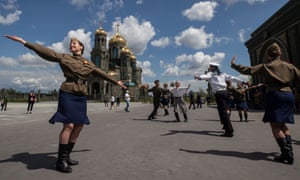 “Only a nation that loves God could build such a grand cathedral,” said Bishop Stefan of Klin, who heads the Russian Orthodox church’s department for cooperation with the army and regularly holds services at the cathedral, where he is the patriarch’s designated representative.

The 59-year-old bishop, who was an officer in the Soviet and Russian missile defence forces before becoming a priest, defended the use of Soviet symbols, saying the cathedral depicted “all the epochs of our state, Holy Rus” and it would be wrong to leave out the second world war, given how many Soviet soldiers were religious.

But the imagery has proved controversial. “For many priests, who were young in the 1970s and 1980s and personally came up against the repressive Soviet machine, which targeted the church, they are in shock and they can’t get over it,” said Sergei Chapnin, a religious scholar in Moscow. “This is not really an Orthodox cathedral, it’s a cathedral of our new post-Soviet civil religion,” he added. 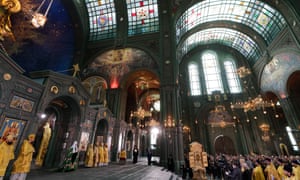 A Soviet hammer and sickle is visible in the stained glass of the cathedral. Photograph: Mikhail Metzel/TASS

Some minor changes have been made after the original outcry earlier this year, most notably the removal of a mosaic about the Kremlin’s 2014 seizure of Crimea that featured images of Putin and Shoigu.

“It was the wish of our president, who is so modest that he thought it wasn’t right for him to be represented on the mosaic, to remove it,” said Stefan. The mosaic detailing the Crimea events now has no Putin, but does depict the infamous “little green men” – Russian special forces, without insignia, who ran the annexation of the peninsula and whose presence in Crimea was initially denied by the Kremlin.

In a large mosaic devoted to the Soviet and Russian armies since the second world war, two angels look down at a group of soldiers carrying modern weapons, and there is a list of commemorated conflicts, ending with “forcing peace on Georgia” in 2008, “the return of Crimea” in 2014 and the “fight against international terrorism” in Syria. There is space for future conflicts to be added. 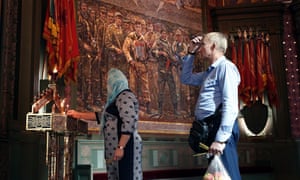 The panel also lists the two Russian wars in Chechnya, as well as Soviet military interventions to crush the Hungarian revolution in 1956 and the Prague spring in 1968, and the Soviet invasion of Afghanistan. Asked if the church really wanted to suggest that all these interventions were sacred, Stefan said it was wrong to focus on particular conflicts.

“We are not talking about the geopolitical background at any particular time, we are talking about the fact that our armed forces have sacred help from above, from God and from the heavenly saints. That’s what the cathedral is about.” 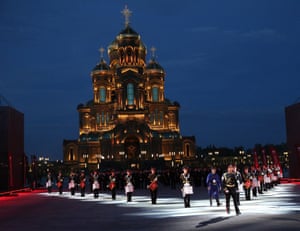 A Russian military band march in front of the cathedral during a military music festival in September. Photograph: Mikhail Svetlov/Getty Images

The cathedral is located at Patriot Park, a “military Disneyland” that was opened by Putin five years ago. Three years ago, Shoigu was among 5,000 spectators who watched a re-enactment of the 1945 storming of the Reichstag at the park, involving tanks, planes and a giant model of the Berlin parliamentary building.

With the opening of the cathedral, there are even more options for a family day out. About 20,000 visitors a day have visited on recent weekends, and even on a Tuesday afternoon this week there were hundreds of people inside the cathedral, and many taking excursions. 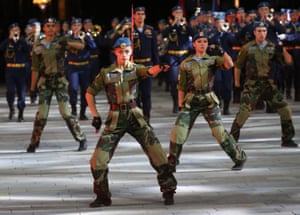 Dancers and musicians of the paratroopers band perform during the military music festival in September. Photograph: Mikhail Svetlov/Getty Images

Wrapped around the cathedral’s perimeter, in a mile-long horseshoe, is a bombastic, interactive museum called 1418 Steps to Victory – one step for each day of the Soviet war effort – that opened at the same time as the cathedral. Many of the rooms have computer-game-style recreations of episodes from the war playing out on huge screens, and some also have temperature and “smell” elements. Children can pose for photographs with a mannequin of a surrendering Nazi soldier, and there are jigsaw puzzles, souvenir mugs and toy missile launchers for sale in the gift shop. 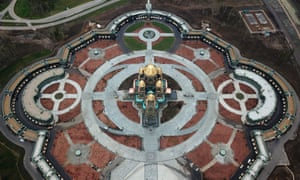 An aerial view of the cathedral. Photograph: Mikhail Japaridze/TASS

But while there are plenty of war museums in Russia the cathedral is something altogether new, making explicit the quasi-religious subtext of the way the war is remembered in Russia.

Dmitry, a 28-year-old altar server working at the cathedral, claimed that the military and religious images on its mosaics, far from being a jarring combination, are in fact a perfect fit: “In the war, our soldiers martyred themselves so that we could be free and independent. Only Russians are capable of sacrificing themselves to save humanity, just like Jesus did.”