The Ugandan musician turned politician Bobi Wine addressing a rally, after he said he was arrested, beaten and held in solitary confinement.Credit…Badru Katumba/Agence France-

In several countries, entrenched leaders are taking advantage of coronavirus restrictions and a world distracted by the pandemic to clamp down hard on prominent political opponents.

NAIROBI, Kenya — Since the presidential campaign kicked off in Uganda in early November, the most prominent opposition candidate, Bobi Wine, has been tear-gassed, arrested and beaten by the police, held in solitary confinement, and charged in court for holding campaign events in violation of coronavirus restrictions.

“I know they want me dead as soon as yesterday,” Mr. Wine, a musician-turned-lawmaker whose real name is Robert Ssentamu Kyagulanyi, said in a telephone interview. “We are campaigning every day as if it’s the last.”

Mr. Wine is one of several high-profile opposition leaders in East Africa who have recently been jailed, exiled or silenced as they challenge entrenched leaders and political parties. Heads of state have used the coronavirus as a pretext to strengthen their grip on power and have introduced laws to smother dissent, analysts say.

There has been less international attention and outcry than usual, with many countries that traditionally serve as watchdogs preoccupied with the pandemic and domestic concerns. While some have issued statements of concern, they have not threatened sanctions over the violence, or offered to mediate, as they might once have.

And the United States, under the isolationist leadership of President Trump, has been far less engaged in defending human rights globally. The country has also lost credibility to intervene internationally as the world saw American police forces caught on video violating human rights at home.

The repercussions have been felt in elections in several East African nations.

In Uganda, which votes in January, Mr. Wine has faced intense intimidation in his bid to unseat President Yoweri Museveni, who has ruled the country with an iron grip since 1986.

In Tanzania, Tundu Lissu, a lawyer and former lawmaker, received death threats as he campaigned for president, and was hounded out of the country after an October election that some international observes said was undermined by fraud.

And in Ethiopia, the media mogul and opposition figure Jawar Mohammed has been lingering in prison for almost five months on charges of terrorism.

“Opposition movements are facing some of the most dire challenges to their existence since this era of democratization first took hold in the region in the early 1990s,” said Zachariah Mampilly, co-author of the book “Africa Uprising: Popular Protest and Political Change,” and a professor of international affairs at the City University of New York.

As opposition leaders face off with powerful establishments, these “regimes are revealing the violent sides that have always undergirded their power,” Mr. Mampilly said. 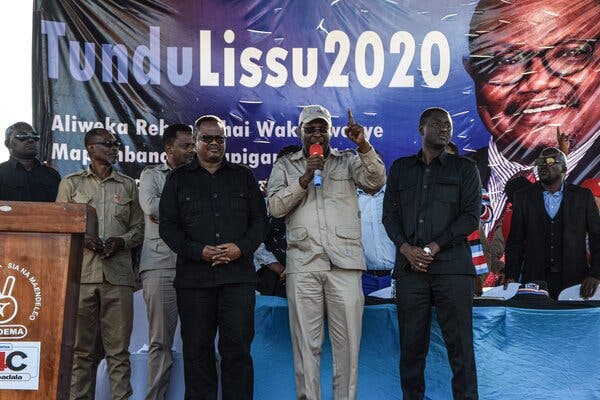 In Tanzania, Tundu Lissu, center, who survived an assassination attempt in 2017, returned to run in an October election. He has since left for exile in Belgium.Credit…Ericky Boniphace/Agence France-Presse — Getty Images

The challenge has been acute in Uganda in recent weeks, where Mr. Wine’s arrest on Nov. 19 sparked violent protests that led to the death of at least 45 people and the arrest of almost 600 others, according to the police.

The authorities have accused Mr. Wine of holding political gatherings that flout coronavirus guidelines, which stipulate that campaign rallies be limited to 200 people. But security forces, he said, have not clamped down on rallies supporting Mr. Museveni and the ruling National Resistance Movement, despite drawing campaign crowds exceeding the 200-person limit.

“There’s an absolute double-standard in operating procedures when it comes to enforcing the rules,” Mr. Wine said. “It’s like the coronavirus is only affecting the opposition.”

Although Uganda’s electoral commission has encouraged candidates to campaign on radio and television instead of holding rallies, Mr. Wine said the authorities have raided studios to stop his appearances or ordered hosts to cancel them.

A Ugandan police spokesman did not immediately respond to questions about the treatment of Mr. Wine.

Mr. Wine, 38, said he is riding on the frustrations of the country’s young, who make up a significant majority of the nation’s 45 million people. Mr. Museveni, 76, was initially credited for bringing stability to his nation, but has been accused of brooking no criticism, overseeing widespread online surveillance and censorship, and introducing punitive anti-gay laws. In order to run for an unprecedented sixth term, he approved a law that ended presidential age limits. 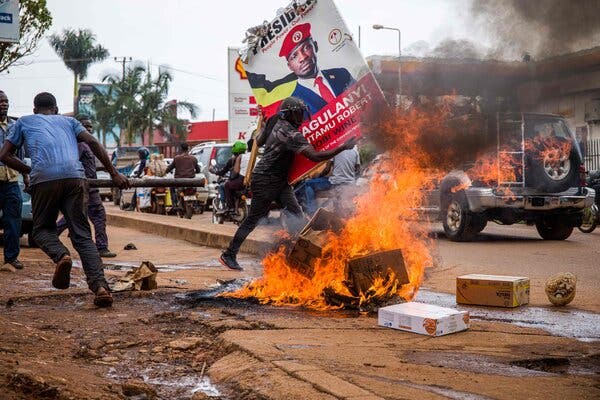 As he has campaigned countrywide, Mr. Museveni has accused the opposition of working with outsiders and “homosexuals” to destabilize the country. At a recent rally, he struck an ominous note, saying, “They will discover what they are looking for.”

In Tanzania, observers said the elections on Oct. 28 were marred with violence, the arrest of opposition leaders and widespread allegations of fraud and irregularities. In the hours after President John Magufuli won a second term, the main opposition contender, Mr. Lissu, said he started receiving death threats. Mr. Lissu had already survived one assassination attempt in 2017, went into exile and returned this year to run for president.

Hassan Abbas, a spokesman for the Tanzanian government, denied the allegations of threats.

After the election, Mr. Lissu went into hiding but was soon arrested outside the German embassy in the port city of Dar es Salaam, where he had sought protection. He said the police questioned him about trying to “overthrow the government.” After German diplomats got involved, Mr. Lissu was released and decided to immediately leave the country.

“It’s sad the way things have turned out,” Mr. Lissu said in a phone interview from Tienen, Belgium, where he is now living.

Mr. Lissu, 52, said that “it was going to be a mountain climb” to unseat the government of Mr. Magufuli, which has curbed political and civil liberties and placed restrictions on media and human rights organizations. Mr. Magufuli has declared the country coronavirus-free, but has not released any data since April about the pandemic.

In Ethiopia, Mr. Mohammed, the most formidable political challenger to Prime Minister Abiy Ahmed, was arrested in July and later charged with terrorism, after being linked to a wave of unrest that followed the killing of the popular singer Hachalu Hundessa in June.

Mr. Jawar, 34, hails from the same Oromo ethnic group as Mr. Abiy and helped propel him to power in 2018. Mr. Jawar runs the Oromia Media Network and has a large following on social media. But the two have since clashed over their vision for Ethiopia’s future. 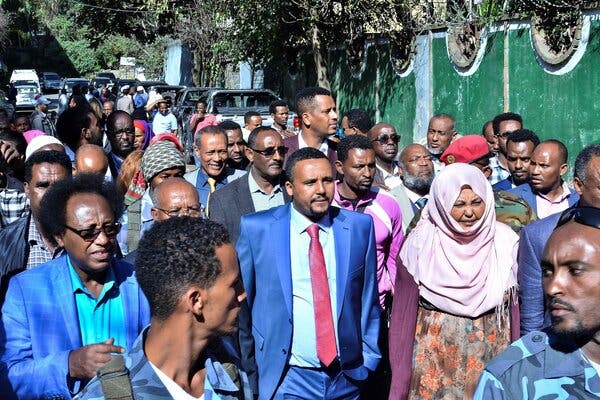 In Ethiopia, the media mogul and opposition figure Jawar Mohammed, center, has been charged with terrorism and has been lingering in prison for months.Credit…Agence France-Presse — Getty Images

The country has now plunged into crisis since Mr. Abiy, who won the 2019 Nobel Peace Prize, started a military operation to subdue the northernmost Tigray region in early November. The sweeping assault has pushed more than 40,000 people to flee the Tigray region into Sudan, drawing concerns from the United Nations as well as regional and global leaders.

Ken O. Opalo, an assistant professor at Georgetown University’s School of Foreign Service, said that even with Mr. Mohammed and many other government critics in prison, it will be hard to silence opposition movements in Ethiopia or “go back to the old closed” system of rule, given how much the country has opened up in the past few years.

Two other countries in the region — Burundi and Djibouti — also persecute the political opposition. In Burundi, officials from rival parties were targeted ahead of May elections. Under the new president, Évariste Ndayishimiye, who replaced the longtime ruler Pierre Nkurunziza, there has been an increase in opposition detentions and disappearances, said Thierry Uwamahoro, a Burundian democracy activist who is now based overseas.

In Djibouti, where Ismail Omar Guelleh has been president since 1999, the authorities have stamped out public protests and arrested journalists and opposition members. As the country prepares for presidential elections in April, opponents of Mr. Guelleh doubt they can mount a successful challenge.

“When it comes to politics, Djibouti is a black hole,” Daher Ahmed Farah, the head of the opposition Movement for Democratic Renewal and Development party, said in a phone interview from exile in Belgium.

The struggles in all these countries attest to the yearning among many in East Africa for genuine political transformation, said Mr. Mampilly of the City University of New York.

“As with all such periods of transformation, there will be continued setbacks, and hopefully, progress as well,” he said.