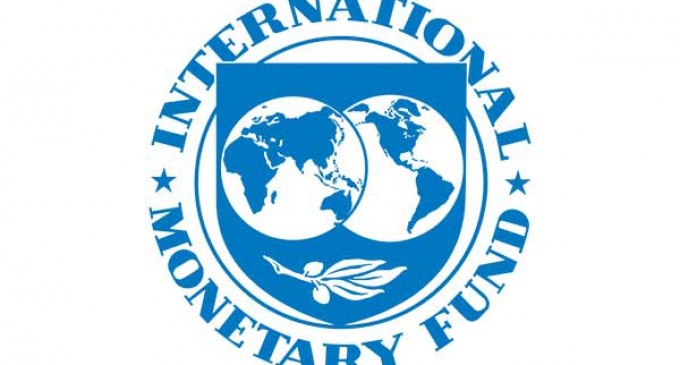 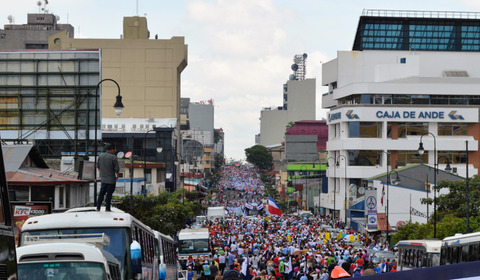 An estimated 40,000 Costa Rican state workers and students staged a two-day strike on April 26 and 27 to oppose policies of the government of President Luis Guillermo Solís Solis, which is attacking workers’ incomes, public education, health care, and the right to water. The central government estimated that 50 percent of all public health and 70 percent of public education workers participated in the strike. The unions said the strike affected 80 percent of the health services and 95 percent of the country’s educational institutions.

Union officials had threatened to extend the strike indefinitely, but sent the workers back to work once the ministers of health and labor agreed to meet last Thursday for negotiations. On Thursday, the different unions were split over their demands and the talks came to a halt. Meetings continued on Friday.

The public sector union association BUSSCO and the teachers’ union ANDE convoked the strikes primarily to oppose plans to reduce public workers’ incomes, including the single salary or Public Employment Law, which is directed at drastically reducing workers’ wages.

On the eve of the walkout, President Solís stated that there was “no justification” for the strikes since “not a single point in their demands is not already present, or could be incorporated, into current negotiations.”

Workers who participated in a mass demonstration Tuesday, however, expressed their concerns and anger over the government’s counter-reforms and voiced their willingness to fight back against the government and the business elite.

“The single salary [proposal], more than anything else, is what worries us. It would take away approximately 40 to 50 percent of our net income,” said Gabriel, a math high-school teacher.

He added, “I have two small children who depend on me. If this law gets through, I would have to quit and do something else. I don’t know what.”

Asked whether he perceived any results from previous strikes, Gabriel answered: “Other times we haven’t felt any, but we hope this time will be different. … We want a permanent strike until the government gets rid of these proposed bills!”

The strikers were also protesting against public hospital “death lists,” with an estimated 500,000 patients waiting for surgery and thousands more waiting for examinations.

The government is seeking to dismantle and privatize the public health sector, a process demonstrated by the state’s poor clinical infrastructure, expired drugs, salary bonuses to high functionaries, a massive debt built on poor investments, the shortage of medical specialists and the absence of efforts to reduce waiting lists.

Under International Monetary Fund (IMF) orders, the government is threatening to revoke collective bargaining agreements and slash retirement benefits, while raising the minimum age. Among other reactionary measures, it intends to limit unemployment benefits to eight years, reduce medical and family leaves, slash yearly raises from 5.5 percent to 2.54 percent and add tougher performance evaluations to approve them.

The unions also oppose the new tax bill, which would turn the current 13 percent sales tax into a 15 percent regressive value-added tax, covering a wider scope of services.

Public health workers were under direct orders from their unions not to speak to interviewers and to direct all questions to union leaders. However, a nurse, who decided not to give her name, said that she has three sons and “would not be able to afford taking care of them if the reforms pass.”

Miguel, a “retiree from ANEP, another one of the traitor unions in this country,” as he put it, also hoped that, “if the government doesn’t heed it, this demonstration today will be extended indefinitely.”

With the support of the pseudo-left Frente Amplio, the unions betrayed the workers by decentralizing the protest, calling the strike a “rehearsal,” and falsely promising bigger actions in the future. The unions, along with Frente Amplio and the ruling PAC party, did exactly the same thing in 2005 and 2006 with the anti-CAFTA protests, including calling them “rehearsals.”

These demoralizing tactics by the unions and the pseudo-left parties have become essential tools for the political and business elite to continue imposing austerity measures and privatizations.

Miguel said that he was mainly protesting against a recent water law. In 2009, he was part of the efforts to collect 150,000 signatures to propose a law declaring water a human right. “But the parliament manipulated the bill so much that it became an commodity,” he concluded, “it got privatized.”

In another significant betrayal, Frente Amplio and Patria Justa supported the approval of the Labor Process Reform, which limits public sector strikes and gives private sector employers the final decision on whether a planned strike “fulfills the requirements” to make it legal.

Perhaps more importantly, it “prohibits a union in a specific trade supporting or demonstrating in favor of other sectors that are not of their concern.”

Franklin, a sociologist and member of the Workers Association of the Labor Ministry, said: “Our focus today is on tax evasion and pay cuts against public employees. It’s on our backs that the government is placing the tax deficit, knowing that tax evasion is 8.2 percent of GDP.” In comparison, Costa Rica spends 7 percent of its GDP on education each year.

He criticized the government for attacking workers’ rights to negotiate and protest in order to cut salaries and employment and concluded, “the solution is to make the rich pay like rich, and the poor pay like poor.”

Income inequality within the government is comparable and in some cases greater than that in the private sector. The Ministry of Planning calculated that the highest state salary is 55 times the lowest. For an average employee, 15 annuities amount to $1,440 in yearly wages, compared to $24,400 for a state manager, about 17 times greater.

Oxfam reported in 2015 that there are about 100 Costa Ricans who individually own more than $30 million in assets and collectively own as much as four times what is spent on education yearly.

When asked whether there are any parties that represent working class interests, Franklin answered. “We might have some sympathies and compatibility with Frente Amplio, but we don’t coincide in other things. We believe that, with these proposed bills, our ally will be Frente Amplio.”

A school principal and member of ANDE, protesting with a group of colleagues. spoke to the WSWS. She is particularly concerned about the changes in the education system, but said that, “We have a long list of measures that we could take to exert pressure on the government. For instance, we could simply stop taking yearly census data, for which they pay us as unskilled cheap labor.”

The dual education reform plans to institutionalize the existing gap in school completion rates and education quality that exists between technical and academic high schools. It plans to oblige students in technical schools to virtually become free labor for companies in order to get certified.

The structural schooling disparity, which would get consolidated with dual education, leaves an entire sector of the population with little or no opportunity to complete or advance their education. Within low-education households, only 15 percent of those between the ages of 18 to 24 continue to study, compared to 79 percent of those in households with an average of post-secondary education.

The school principal added, “We can’t be afraid, just like previous generations, we are defending our rights.”

The government is also planning to collect the retirement savings of all 1.4 million public workers in order to more easily invest them within the government and in speculative markets. It will gradually make the workers themselves pay more for the fund’s sustainability by imposing regressive taxes and reducing pension benefits.

According to Oxfam, partial and complete social security privatizations in Latin America have led to more unequal coverage. In Costa Rica, there already is a 44 percent gap in access to health care and 28 percent gap in pension enrollment between the top and poorest quintiles.

The Trinidad and Tobago government says it will not enter into any structural adjustment program with the International Monetary Fund (IMF), but defended its decision to have advisors from the IMF and the World Bank assist it to deal with reviving the economy of the oil-rich, twin-island republic.

Finance Minister, Colm Imbert, speaking in Parliament, on yesterday, said “we are not in any standby arrangement and, under this PNM (People’s National Movement) administration, under the leadership of Dr. Keith Christopher Rowley, there will be no standby arrangement with the IMF.”

Opposition legislators have criticised the eight month old government of seeking to hoodwink the population and enter into an agreement with the Washington-based financial institution, as the country deals with a significant decline in revenue, as a result of the drop in oil prices on the world market.

Last weekend, the leader of the Movement for Social Justice (MSJ), David Abdula, described as “an amazing indication of the abject failure” the decision of the government to seek the assistance of the two financial institutions in dealing with the sluggish local economy.

“It’s an indication that he’s (Imbert) unsure of what he’s doing and if that is an indication of that, then that contributes to the lack of confidence, generally, in the economy,” Abdulah said.

Last week, Imbert told reporters that teams from the two Washington-based financial institutions were here, assisting the Rowley administration saying “we have made arrangements for experts, primarily from the World Bank but also from the IMF to give us advice on a number of pressing matters.

“The first one would be an appropriate oil and gas fiscal regime in the current environment of low oil prices and declining production in our oil and gas fields.

“One of the things we need to do at this time, with low oil prices, is to model a fiscal regime that would achieve two objectives which are quite often contradictory and one is to maximise revenue for the government.”

Imbert, who led a delegation to Washington for talks with the financial institutions there, said the new regime would also be to “provide incentives to oil companies”.

Imbert defended the decision to establish the new regime, telling legislators “multi-national companies charge expenses in their head office which are unreasonable and thereby deprive Trinidad and Tobago of revenue.

“So this much reviled and hated IMF…will help this country to design a competitive oil and tax regime, which will boost revenue for Trinidad and Tobago and assist us with transfer pricing, which will allow us to earn as much revenue as we can from the multi-nationals.”

He said the IMF assists countries all over the world and accused the opposition of wanting to “frighten people for absolutely no reason”.

Imbert told legislators that regarding the composition of the Economic Advisory Board “we made sure to bring as many diverse views as possible because the PNM is all inclusive.

“We have people on the right, people on the left, people in the middle, we have trade unionists, we have businessmen, we have academics, all together in one creative beautiful mixture.”

In its latest economic bulletin released here, the CBTT said that domestic real gross domestic product (GDP) is projected to contract by close to two per cent, as a result of forecast declines in both the energy and non-energy sectors.

It said year-on-year inflation is forecast to settle around its 10-year average of six per cent, given the impact of the widening of the value added tax (VAT) base on food prices while the unemployment rate is expected to rise marginally to 4.1 per cent.

Meanwhile, dismissed Central Bank of Trinidad and Tobago governor, Jwala Rambarran, today, said he expects there to be more layoffs as the country deals with the downturn in economic growth.

“We see every week layoffs…further retrenchment…so the job losses are happening,” he said, telling television viewers that “strange enough, that is happening in a period where you have had significant slack in the labour market.

“Our labour market is an area that needs significant reform,” he said.