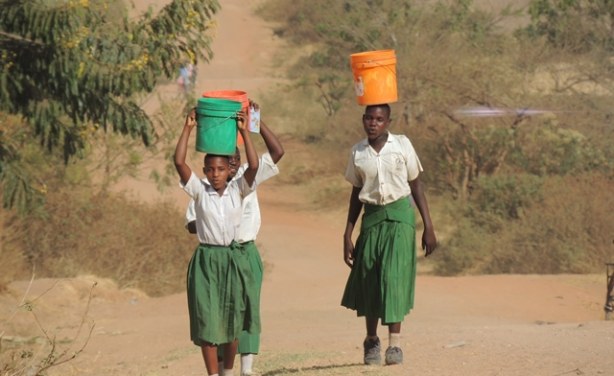 Girls in Geita District are caught between a rock and a hard surface. Despite grappling with cultural norms and values that reduce them to mere sources of income upon marriage while on the other hand strive to dodge early pregnancies and marriage traps; they are disheartened by lack of sanitary facilities in schools.

It is a sad reality that majority of schoolgirls in the district stay at home, missing classes during their monthly periods due to acute shortages of menstrual hygiene facilities and services.

A ten-day survey by the ‘Daily News’ in the district found out that most schools lack clean water, menstrual sanitary facilities and services – factors that force girls to stay out of schools during menses.

«We have 48 girls enrolled in Standard Seven alone, but a quarter of them go missing in class for four to five days a week due to menstrual related issues,» says Magdaline Singano, a Matron at Nyalwazanja Primary School in Nyamwaga rural area, Geita District.

The same was reported at Lwamgasa Secondary School where five to six girls in one class record absenteeism every day of the week — menstrual challenges being the main factor. «A monthly period is a preventable reason for most of our girls not to attend classes,» said the School’s Matron Ms Atupakisye Megreth.

«Our school lacks permanent menstrual facility kits to offer girls hygiene services,» she said. Nyalwazanja and Lwamgasa schools are among the many schools in Geita that have no reliable water sources within the school compound, with limited toilets to accommodate the needs of schoolgirls.

Nyalwazanja Primary School alone has 662 girls, but has only seven latrine pits that serve all the girls. One pit is being shared by 95 girls. «The pits are not even in good condition,» said the School Matron.

The report further says that many school-going girls and women in developing countries such as Tanzania struggle to find appropriate facilities and places to deal with menses.

One Vumilia Spirian, a Standard Six pupil at Ukombozi Primary School is one among the very many girls in the district’s schools, who go through the painful ordeal that comes with the monthly flow, as well as missing classes.

Vumilia has no option but to stay at home for a week when she is in her monthly period. «I normally stay at home to avoid embarrassments at school,» the 13-year old girl said.

Even when at home, Vumilia finds it difficult to use sanitary products to stem her monthly bleeding. «I use substances such as pieces of mattresses or shabby dresses to curb the bleeding,» she narrated with fear amid disgrace.

The same case applies to Susan Adam a form-three student at Lwamgsa Secondary School in Geita District. «I always stay out of school for three to four days just to face out my monthly period… this is because my parents lack money to purchase sanitary towels that I can use while at school.»

The ‘Daily News’ conducted a brief survey on the prices of the disposal sanitary pads and discovered that in most retail shops, in Geita Town, the products range between 1,500/- to 3,500/- per package.

A Baseline Survey report on Schoolgirls Menstrual Hygiene Management, 2014 for 8 districts in Tanzania indicated that most parents said that they would support their children with sanitary products if the prices are lowered to between 500/- and 800/- equivalent to 35 to 40 US cents.

The report further outlined that 82 per cent of adolescent girls lack sufficient knowledge about their body changes and especially on how they can handle and manage themselves during menstruation.

«This ignorance affects girls who need to be supported and guided during adolescence stage, to rescue them from getting into risk of dropping out of school,» the report read.

According to the Water, Health Education and Sanitation Coordinator in the Ministry of Education, Ms Theresia Kuiwite, it is estimated that a girl student spends up to 60 days at home to serve the five days at the menstrual cycle every-year.

«Use of traditional towels makes girls lose confidence while attending lessons and thus opt to remain at home,» she said during the launch of International Menstrual Hygiene Week last year in Dar es Salaam.

The ‘Daily News’ discovered that some school managements in the District strive to purchase the menstrual products for the girls but fail to carter for the needs of all girls due to limited resources.

«We do receive some 50 to 70 packages of sanitary towels per month… normally budgeted by the school management from the capitation grant, but the products do not carter for the needs of all the girls,» said the matron.

Lwamgasa School has a total of 352 girls. «We also have girls who come from families that cannot afford to purchase sanitary products and in that matter the majority are forced to stay at home,» she said, adding that some opt to drop out of schools for failure to endure the pain of going through the ordeal.

«Lack of water worsens the situation. Our school lacks permanent sources of clean and enough water. Our girls have to search for the precious liquid outside the school compound, a situation that exposes the girls at high risks of drop out,» she narrated.

Lwamgasa Deputy Principal, Mr Masaguda Bundu said that the school’s dropout rate among girls is higher than that of boys. «The performance of girls in school is also very low compared to boys… this is because girls spend few hours attending classes compared to boys,» he elaborates.

Despite poverty facing majority of families in the district, there are social taboos related to menstruation and a culture of silence among the people in as far as the topic is concerned also haunt schoolgirls.

One Maria Stephano, a mother at Buyagu area in Geita District told the ‘Daily News’ that in Sukuma tribe, it is a taboo for girls, mothers and women to speak about their monthly periods before anybody.

«In our tradition, a girl-child is not allowed to reveal such information (menstrual period) to the family members or anybody else except her mother and if it is possible should be said in secret,» she said.

«Girls are required to protect their personalities and for that matter they are not allowed to reveal to anyone during their monthly periods because it is taboo,» she insisted.

One Noelia Nestory, a female teacher at Lwamgasa Primary School said that social taboos among the people in the area are seriously undermining the girls’ education and opportunities.

«Our schools have girls who cannot totally reveal the information of their monthly periods to the matron or female teachers present…the beliefs in their families prohibit the habit… they simply go missing from schools for days with some disappearing forever because the scenarios deny them self-confidence,» she said.

She called for government to conduct mass campaigns to create awareness on the value of girl-child education in the district. «Having such awareness campaign will help eliminate some of the taboos especially those related to menstruation in order to give girls freedom of expression,» she added.

She advised the government to allocate funds for the purchase of sanitary towels in schools to serve needy girls so that they can stay at school for better performance. «The matter should not be left in the hands of the government alone –we have NGOs and other education activists who visit our school for other missions, they should also support by contributing funds or advocate free distribution of sanitary towels to rural schools,» she disclosed.

Education Logistics Officer of Geita Township Council, Ms Neema Emmanuel confirmed that the area faces challenges of water and sanitation facilities, shortage of toilets pits in most schools to support the girl-child during their monthly periods,» she noted.

«It is true that availability of water and sanitation still remains a major challenge in some schools but efforts are underway to ensure the majority of schools are equipped with the services,» she said.

But a Head Teacher of Buyagu Primary School, Mr Juma Bugekere, said the resources from the school’s capitation grants are inadequate to carter for the menstrual products for all the girls in school.

The Baseline Survey report of 2014 conducted in eight districts in Tanzania indicated that 80 per cent of the school committees and teachers had never planned and allocated budget for things such as sanitary towels for emergency.

However, asked for a comment the Education officer for Secondary Schools in Geita Township Council, Mr Ramadhan Khalfan, said the government in collaboration with investors in the district has planned to put up water facilities in all secondary schools.

«Some of the schools have permanent water sources and well equipped rooms with menstrual kits for girls, the only challenge is of lack of enough menstrual facilities and trained personnel to manage the menstrual sanitation among the girls,» he said adding that District Township consists of 10 secondary schools composed of 4,613 girls’ population.

A study report by Tanzania Water and Sanitation Network (TAWASANET) on Improvement of Menstrual Hygiene Management (MHM) in Secondary Schools indicates that framework governing it is still not sufficient.

The report said that poor framework has impacted on the current trend on MHM considerations, «There are no bases of executing MHM issues sufficiently and at acceptable standards,» read part of the report.

Member of Parliament (MP) for Busanda Constituency in Geita District Ms Lorensia Bukwimba said that plans were underway to conduct an awareness programme on menstrual hygiene management in schools situated in the constituency.

«I believe all the challenges facing our girls are due to insufficient knowledge on menstrual hygiene management,» she said, adding that a campaign is scheduled for September this year. She said the programme will focus on enforcing menstrual sanitation trainers equipped with facilities in schools.

«It also aims at creating awareness in the society,» she said.