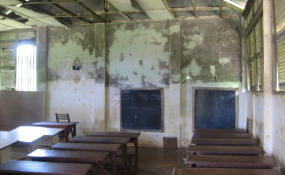 Maputo — Children forced by the militia of the rebel movement Renamo to abandon their schools in the central Mozambican province of Manica are being relocated, as far as possible, to other schools, according to Education Minister Jorge Ferrao.
Speaking in the provincial capital, Chimoio, Ferrao said the pupils are being enrolled into alternative classes in schools located in areas where the Renamo gunmen are not active. He did not say exactly how many pupils have been able to resume their studies. They are receiving “recovery lessons” so that they can make up for lost time, and catch up with their colleagues whose education has not been disrupted.
“We think that putting these children into alternative classes is the best way out”, said Ferrao. “What we want is that these children are able to go on studying. This process is under way, and many pupils have returned to the classroom”.
Because of Renamo armed activity, 52 schools remain closed in parts of Barue, Mossurize and Manica districts, where Renamo is disrupting the normal functioning of public and private institutions alike.
The provincial education authorities say that the closures affect about 22,000 pupils, and hundreds of teachers.
“We have schools in very remote parts of these districts”, said Ferrao. “The schools have been directly affected and consequently many children are dropping out of education. The pupils are being put in alternative classes where they will also benefit from recovery lessons. We want them to have the same knowledge as those who remained permanently in the classrooms”.
The Renamo incursions into Manica province began early this year, and as from mid-February Renamo ambushes on the roads became frequent. The presence of the Renamo gunmen has also disrupted the health services, making it difficult to provide essential medical care to Manica communities.