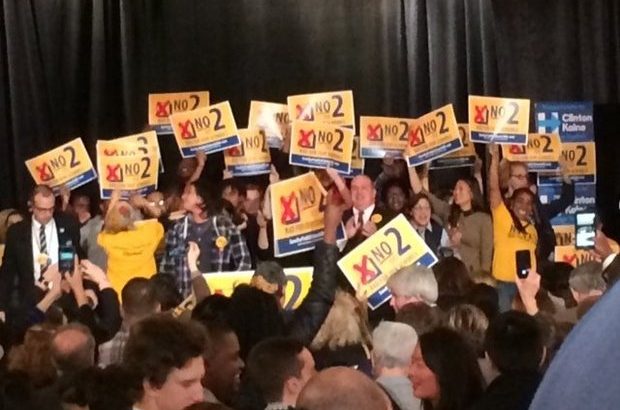 Although an expansion of charter schools was defeated at the ballot box, the discussion of how to fund and improve Massachusetts education is far from over, advocates on both sides of the ballot question said Tuesday night.

«I am proud to have joined with thousands of parents, teachers and education reformers in a worthwhile campaign to provide more education choices for students stuck in struggling districts, and while Question 2 was not successful, the importance of that goal is unchanged,» Gov. Charlie Baker, a Republican and a strong advocate for charter school expansion, said in a statement. «I look forward to working closely with all stakeholders toward our common goal to ensure a great education for every child in Massachusetts, regardless of their zip code.»

The ballot question would have allowed the state to approve up to 12 new or expanded charter schools a year, outside of an existing cap. Currently, more than 32,000 students are on waiting lists for charter schools.

Although voters rejected the initiative, meaning there will be no change to the current cap, the debate has raised issues that lawmakers may be pressed to reconsider. How should the state improve failing school districts? Do changes need to be made to a funding formula to provide more money for all schools? Should the charter cap be lifted at all?

«Now that the debate about how we improve our school system has been engaged, I hope that the Legislature will see that the public wants all schools to be able to succeed, and it will lead us to a serious discussion about what the foundation budget should look like and what the level of state support for public education should be,» said Auditor Suzanne Bump, a Democrat who opposed charter school expansion. «We have not had that kind of discussion in the 20 years since charter schools were created.»

Attorney General Maura Healey, a Democrat who opposed charter school expansion, said now that the question was defeated, «We really need to get back and roll up our sleeves and figure out what do we need to do to invest in public education.»

Healey said charter school expansion would have been «too much of a band aid and a quick fix» that does not fundamentally address the issue of how to shore up education in all schools.

Healey declined to offer specifics about what she wanted to see happen. But, she said, «I hope that the right players and the right stakeholders are at the table to do the work that needs to be done to make sure that we are taking the steps necessary to ensure that all schools, particularly the lower performing schools, have the kind of educational attainment and opportunities that we want.»

It is far from certain that there is any kind of legislative will to act on charter schools or school funding. While some lawmakers have been trying to lift the charter school cap, the Legislature has been unable to agree on a legislative fix. A new study this year that detailed underfunding in the formula used to pay for public education was largely ignored because of a lack of money to increase education funding.

Lisa Guisbond, executive director of Citizens for Public Schools, one of the organizations opposing a charter cap lift, said her coalition now plans to focus on increasing resources for all schools. «One thing that’s come out of this whole campaign is the need for more resources for all of our students, all of our schools,» Guisbond said.

Liam Kerr, state director for the pro-charter school Democrats for Education Reform Massachusetts, said, «We all have to come together after this and look at our political leaders and acknowledge they have to make hard decisions. And we have to support them in making those hard decisions so that the resources that are dedicated to education are going to things that we know work.»

Kerr said it is clear that some districts are not meeting the needs of students and that charter schools are effective in some of those districts. «People need to come together and figure out if we acknowledge there’s a need, we acknowledge that certain reforms are working, including charters, we need to come together and do more of them,» Kerr said. «I’d hope both the Legislature and municipal leaders would move on and know that more action is needed, both district reform and possibly a targeted charter expansion.»

The Yes on 2 campaign said in a statement that existing charter schools will continue to provide «first-rate education choices» to students. «The creation of the charter movement, and the effort to reform a system that has changed so little in a hundred years isn’t easy, but we know the thousands of parents, teachers and students that have fueled this campaign will press on,» the campaign said.

Senate President Stan Rosenberg, D-Amherst, who voted against charter school reform, said, «The voters have spoken and the matter is resolved. It’s time to shift our focus to 100 percent of the students in our public education system. They deserve the best education possible so they can be engaged citizens and find a meaningful place in our increasingly competitive economy.»

The Senate made its own recommendations this past year for reforming charter schools while lifting the cap, but the proposal was a non-starter in the House, which had passed its own version of a cap lift the previous session.