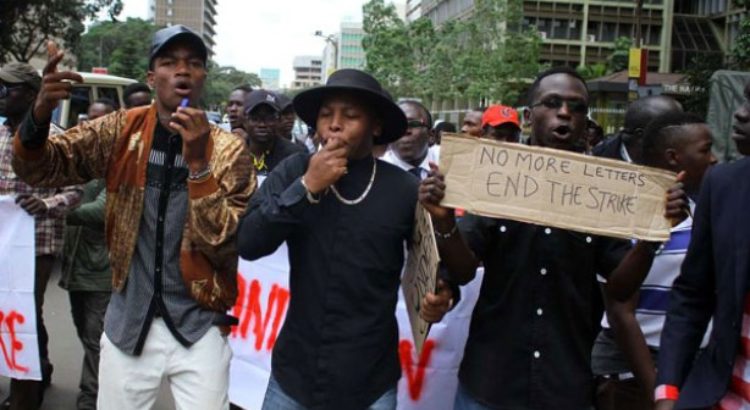 Students from various public universities have accused the education ministry of failing to address the crisis with striking lecturers, saying it is having a negative impact on their studies and causing them to graduate late.

University students on Wednesday protested in Nairobi against the lecturers’ strike that has paralysed learning for over a month.

The students from various public universities accused the Education ministry of failure to address the ongoing crisis.

Kenyatta University student Peter Evans said many of them were unable to graduate in time due to the strike and demanded that the government address the issue to prevent further agony.

«We are tired of staying in the university without learning. We want to go back to class,» Mr Evans.

Another student, Mr Dennis Kipsigei, from the University of Nairobi, said they ended up staying in the institutions longer than they should.

«A degree course that is supposed to take only four years is now taking over six years, which is unacceptable. We want the Education ministry to look into the plight of students,» he urged.

Education Cabinet Secretary Amina Mohamed said she had not commented on the matter due to lack of accurate data on the staff of the public universities across the country.

«Now I can say with a measure of comfort that we have received 80 per cent of the data. We are going to assess it in collaboration with an inter-ministerial committee that is looking into the demands being raised and forge the way forward,» she said.

However, Ms Mohamed reminded the lecturers that they were in contempt of court by failing to go back to work.

The government has said it will use the data to make a counter-offer to the lecturers and other staff estimated to be 27,000.

The staff, who belong to the Universities Academic Staff Union (Uasu), the Kenya Universities Staff Union and the Kenya Union of Domestic, Hotels, Educational Institutions, Hospital and Allied Workers, challenged the Ms Mohamed to explain why the ministry did not have an accurate record of the public universities’ workers.

Uasu Secretary-General Constantine Wasonga said the Ms Mohamed had failed in her mandate if the ministry could not give the exact number of the employees.

«How can she not know the number of employees in the universities? This shows that the ministry has not been doing its work properly,» said Dr Wasonga.

As the protests continued, Deputy President William Ruto was holding a meeting with officials from the Education ministry and the Treasury.

However, Ms Mohamed was at Mary Hill Girls High School in Kiambu County for the prize-giving day.

«Held discussion with officials of the ministries of Education and National Treasury, Nairobi,» Mr Ruto tweeted.

His spokesman, Mr David Mugonyi, later told the Nation the discussions between the DP and the officials were on secondary and tertiary education.