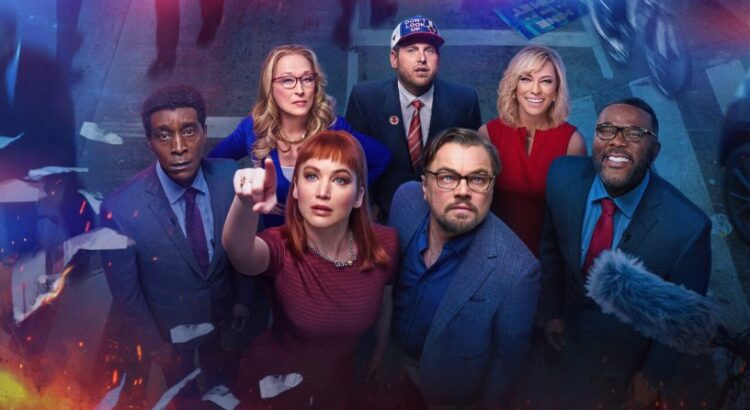 Don’t Look Up: What Matters Is The Market

North American black humor is shown in its fullness with the film «Don’t look up» (2021), written and directed by Adam McKay. It is a satirical science fiction story about a gigantic asteroid (it kills planets) heading towards earth threatening to destroy human civilization and the decisions made in this regard by the government, the scientific community, the mass media and population in general. Its plot is too similar to what is happening with respect to climate crisis.

After much disregard for the opinion of scientists, the government bureaucracy decides to try to divert the asteroid from its collision path with the blue planet, by sending rockets with nuclear explosives. The mission of saving the earth is aborted when the government discovers that the «planet killer» is composed of «rare earth elements” that the technological industry requires, as well as gold and other precious metals. The danger of extinction of the human species is minimized before the possibility of seizing all the potential wealth that the asteroid contains; They attempt a fragmentation maneuver that fails and the elements are destroyed.

In the film it is evident citizens’ growing perception of rulers as stupid people with too much power and banal and superficial interpretations about what is happening in the world , fed only by the support of a facilitating State model of profits and guarantees for the richest. Faint-hearted politicians, «disconnected» from the reality of the common, obedient to the mandates of the stock market. Bureaucrats who risk the people, but always have their «plan B» to save themselves, in this case, with a «space station» that took them to another habitable planet where to restart a capitalist world.

In many countries this film is number 1 on the Netflix list, thus showing the film’s harmony with the disenchantment of the «politics of politicians» and the collective demand for another policy  came from the interests of those below, of the majority.

The film shows the link between the cultural industrial complex and the maintenance of power. The Daily Rip, television program directed by Brie and Jack clearly shows the concealment of what is important by the media dependent on large chains that are listed on the stock exchange. The mainstream media role  is not to inform, but to make what is important seem simple and misinformation is imposed as a trend, where fun becomes relevant. Entertainment as the mainstay of information, above veracity, reveals the current reality of the big media.

The treatment given to scientists (Randall and Kate) in the television program reflects the systematic media intention to reinforce the collective imagination on men and women of science that religions have built. Shy, not very sociable, bipolar, unable to speak in the common language it is a reaffirmation in the film of the disdain of the powerful regarding scientific activity. They use  scientists to feed the mode of production and undertake any new activity that means profit, but they are not interested in the scientific reason for decision-making because this could lead them to dismantle the system or open the way to a radical revolution. The film leaves the work of the big news networks uncovered.

The film shows how scientific activity is controlled by directors of research centers who have the role of guaranteeing the usefulness of discoveries or inventions for the system and avoiding the propagation of any idea that affects the establishedment. He insists on the narrative of placing grassroots scientists as individuals with no political ability to communicate their results, a kind of social autists.

This aims  to strengthen the discourse that it is not the capitalist system’s fault which works to destroy life on the planet, but with men and women of science who do not know how to present their discoveries, showing solutions that do not alter the existing status quo.

There is  also,another scientific activity embodied by billionaires who seize cutting-edge knowledge to guide it with commercial logic, devoid of humanism. This is the case of Mark Rylance who portrays the Musk, Gates, Soros, among others, with his ideology of the market for science. Moreover, this character ends up leading the migration of survivors to another planet, that is, he is shown as the model of successful science, of «real politik.»

Finally, in the scene of the scientists’ family dinner with Kendall’s family, science ends up succumbing to faith, holding hands and surrendering to God in the face of the impossibility of saving the planet. It is a pathetic scene of false resignation of reason to the spiritual world. It presents scientists as «atheists thank God.»

In “Don’t look up”, in order to avoid realizing that the asteroid is approaching the earth, the world population assumes an almost indifferent position to the risks of climate change because if there are jobs and profits it is well worth risking the planet that welcomes us. “Do not look up” is the story of human stupidity, influenced by capital and market logic, capable of subordinating life to the roulette of profits.

It is also the example of how alienation with the capitalist world system is functional to the interests of big businessmen, governments and politicians, but never for the people. It is a parody of what is happening with climate change with anthropocentrism and human centrism as expressions of disconnection with life. But it also shows how  proofs, when presented to the people without mediation, can produce a change of awareness, only  in some cases, like in the film, it can be too late.

Stop the world, I want to get off !

Quino popularized this phrase in Mafalda, which in this case “fits like a glove”. The feeling that remains at the end of the film is that we are facing an unviable model of society and the existing relationship  between science and life. The fact that this film is a production of the cultural industrial complex, starring actors like Leonardo DiCaprio seems to coincide with the speeches of the spokesmen of the Davos Economic Forum who point out that we are beginning a «reboot or reset» of world society, not for transcend capitalism, but to consolidate it in a new context of planetary ecological crisis.

But not everything is as easy as in Mafalda’s expression, if the planet stops working, what we have left is to get out of life. The only way to avoid ecological and neo-Malthusian collapse is by generating a radical change in the social relations of production.