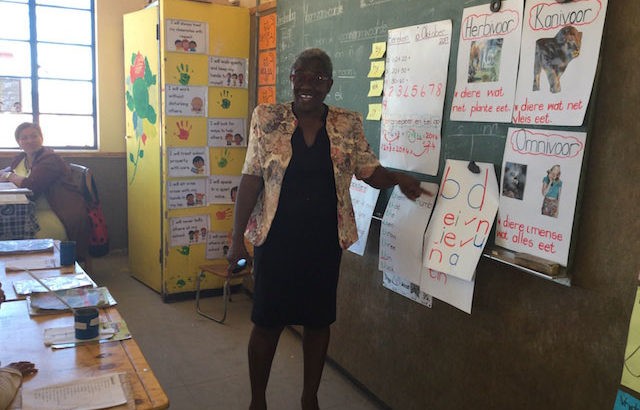 SCHOOLS in the Hardap region are struggling to implement the curriculum introduced into the education sector in 2012 to end the segregation and exclusion of individuals.

The curriculum is designed to end discrimination or segregation on the grounds of academic performance, gender, race, culture, religion, lifestyle, health conditions and disability. The ministry’s policy on inclusive education states that the curriculum is based on the understanding that all pupils have the right to be educated with peers, friends and family members, in their own neighbourhood or local community.

However, according to Veronika Axakhoes, principal of A A Denk Memorial School at Kalkrand in the Naukluft circuit, even though inclusive education entails that pupils should be taught inclusively without anyone being left out, some pupils are automatically left out because of the lack of learning support from the teachers.

“As long as a pupil is not taught on his or her level of ability in that subject, that learner is automatically left out of this inclusive teaching system,” she said.

Axakhoes further said pupils taught in a normal classroom and who experience learning difficulties find it hard to achieve the basic competencies in that lesson because the lesson is usually beyond the pupil’s basic understanding.

“If a pupil is, however, taught on his or her level no matter what level the teacher has to start from, the pupil will show some improvement and at least get some understanding and his or her mind will be opened up,” said Axakhoes.

She said for inclusive education to work, learning support is needed and that phonics should be the basics. “Reading should be integrated during lessons so that every pupil should at least know what phonics are because if you do not know phonics, you will not be able to read, and if you cannot read, there is no way you will be able to study and if you cannot study, you will fail. All these leads to pupils being transferred until they reach Grade 10 and it is from there that the problem escalates,” she added.

Axakhoes, who has 22 years experience in teaching, said she has also taught in other regions such as Erongo, Otjozondjupa and Omaheke where she conducted special learning sessions.

“I have noticed that the sessions we had with the pupils in those regions were fruitful because they are improving. When I started here at A A Denk Memorial School, the teachers were trying hard to provide learning support and from experience I advised them to have phonics cards for every lesson, clear pronunciation of words from the teachers and especially integrate reading in all subjects,” said Axakhoes.

She said she had informed the circuit inspector, Herbert Britz, about the concerns of pupils with learning difficulties and held several meetings with both the inspector and several education officers earlier this year.

She appealed to the ministry to separate pupils with learning difficulties so that they can be taught from the basic level of their understanding.

“We understand that the inclusive education policy does not allow for pupils to be separated but if government can allow that they be taught separately, then the system will have a huge impact on these pupils. Teachers, especially in lower primary, should also be given training on how to offer learning support to pupils with learning difficulties,” Axakhoes pleaded.

Echoing the principal’s sentiments, head girl of A A Denk Memorial school, Legine Garises pleaded on behalf of the pupils with learning difficulties at the school. She said although the inclusive education is well thought out on paper and does not discriminate or stereotype slow learners, the programme has its challenges.

“The fact that we are taught in one classroom with pupils who are average and above average achievers, teachers find it difficult to reach our level. Although we are not labelled as slow learners, it becomes evident within ourselves that we cannot do what the other pupils can do. Frustrations build up and our self-esteem suffers, which eventually results in a lot of pupils dropping out of school,” said the Grade 7 pupil.

Teachers at the school said one of the biggest problems they face is with reading. The teachers also said the pupils have difficulties with phonics, and said the learning support in a 40 minute lesson cannot cater for the different levels of learning abilities.

The teachers also pleaded with the parents and guardians to offer support to their children.

Confirming the difficulties by the schools in the Naukluft circuit, Britz said the issue is not a regional, but a national problem.

“We have discussed the issue at length at my office and had a brainstorming exercise on how to deal with it and identified a few challenges. We try to address this issue in our circuit by using experts to train teachers on how to offer learning support. It is difficult, however, because we cannot reach all the teachers in the circuit let alone the region,” he said.

He said although certain measures are in place, it is simply not enough because a lot of pupils develop a backlog that is not easy to erase.

“Learning support is something that should be an ongoing exercise, not only in primary schools but also in high schools,” said Britz, adding that the matter had been brought to the attention of the education regional director.

“The director is fully aware of the challenges. We, however, tried to address them but budget cuts are hampering our efforts. All schools address the issue against their own circumstances,” he said. Contacted for comment, acting education regional director Ernfrieda Stephanus said she is not aware of the concerns raised by Axakhoes on inclusive education as she is acting on behalf of regional director Mzingisi Gqwede, who is on sick leave.