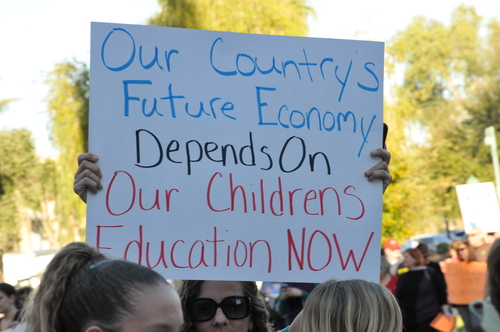 The advocates were part of the Organize 2020 group, which is sponsored by the N.C. Association of Educators, the (Raleigh) News & Observer reported. They marched 23 miles to the N.C. Capitol in hopes of meeting with McCrory—who, according to his spokesman, had a scheduling conflict and could not meet with them. The governor’s office offered to arrange a meeting with the governor’s deputy chief of staff and senior education adviser, the News & Observer reported, but the doors to the Capitol building were locked when the protesters arrived around 5 p.m.

The protesters then sat down and linked arms in the street, blocking a downtown intersection. The police arrested them and charged them with impeding the flow of traffic and resisting, delaying, or obstructing law enforcement officers.

McCrory’s spokesman, Josh Ellis, told the News & Observer that the protesters didn’t respond to the offer to meet with McCrory’s top aides, and the officials went outside to meet the protesters.

«We found them with locked arms in the middle of a rush-hour intersection,» Ellis told the paper. «We usually prefer not to hold meetings in the intersection of a main road.»

Here’s a video of the arrest: 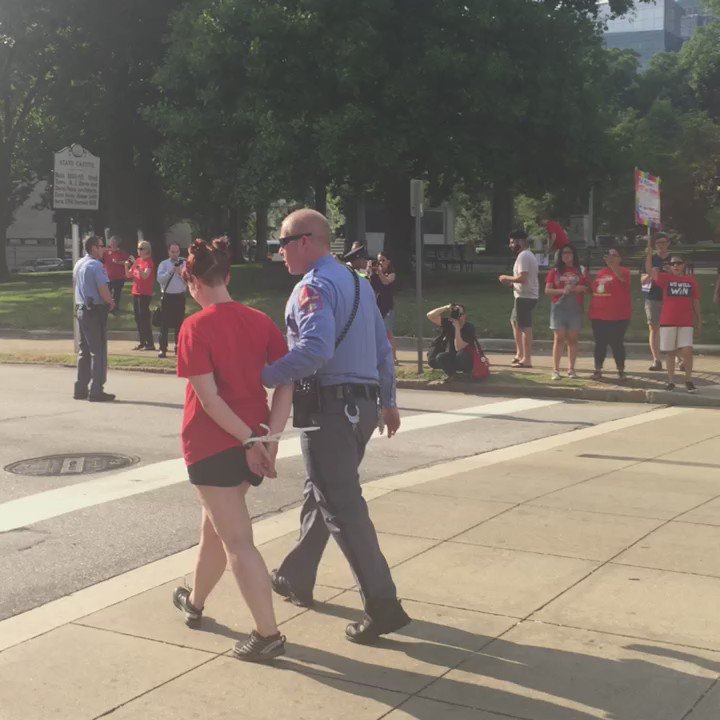 The relationship between the teachers’ union and McCrory—and the state legislature—has been rocky for years. Teacher pay has been a particular point of contention. North Carolina lags behind most other states, falling at 42nd place in the rankings. The state legislature, and the governor’s office, is working to raise teacher pay this year, although the state teacher’s union has criticized the plan for giving bigger raises to mid-career teachers versus the ones with the most experience; the Charlotte Observer has a comprehensive breakdown of the debate.

And last week, Organize 2020 released a report card that gave McCrory an «F» in all areas, ranging from «provided sufficient funding for public education» to «protected our students from discrimination and criminalization» to «preserved clean air and water for students.»