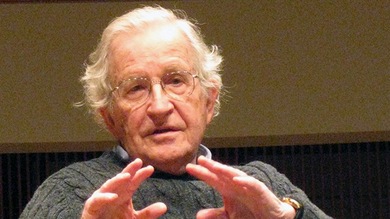 Knight makes an assumption common to those who [are] unfamiliar with government science-technology policy and know nothing about institutions like MIT.

At the time, MIT was almost entirely funded by the military, including the music department, etc. The modern advanced economy was created substantially by government funding in one or another way, often by Pentagon funding of research universities. There was zero military work on campus. You can find the facts from the Pound Commission report on the topic in 1969. Nor did the military involve themselves in any way in what was going on. That of course included my work. Or, for example, the work of colleagues studying American Indian languages, translating work of Wilhelm von Humboldt, etc. Knight is also deeply confused about the work on linguistics that I and others are doing. I explained it to him in response to an email request from him, but he plainly doesn’t understand. Thus he opens with a profound confusion about “universal grammar,” the technical term used for the genetic component of the human language faculty. He thinks this has something to do with some kind of “universal language” that he believes the military were interested in. There was no interest of the sort, and if there had been, it would have had nothing at all to do with our studies of universal grammar. It goes on like that. The whole story is a wreck.

In fact, the Pentagon had so little concern with what we and others were doing that they paid no attention to the fact that our lab also happened to be one of the major academic centers of resistance to the Vietnam war from the early ‘60s, or the fact that I was brought to trial for these activities.

In brief, complete nonsense throughout.

‘There was zero military work on campus’, Noam Chomsky claims in reference to the Massachusetts Institute of Technology during the 1960s. This statement is surprising, since it directly contradicts numerous statements that Chomsky has made in the past. Chomsky knows very well that for 70 years, the majority of scientific research at MIT has been directly involved in the development of military technology.

Naturally, most of this military research was not done in classrooms but in specialised laboratories. This has enabled MIT’s managers to describe these labs as ‘off campus’, even though, as Chomsky himself has said, some of them were only ‘two inches off campus. The labs right next door were doing classified work and people were between [the campus and the labs] all the time.’

The Pounds Commission report – that Chomsky refers to – says that a number of these labs were officially part of the MIT’s School of Engineering and that approximately 500 students worked at various ‘off campus’ military labs.

These military laboratories were so much part of MIT’s campus life that Chomsky himself has said that in the 1960s, ‘there was extensive weapons research on the MIT campus. There were laboratories at MIT that were involved, for example, in the development of the technology that’s used for ballistic missiles, and so on. In fact, a good deal of the missile guidance technology was developed right on the MIT campus and in laboratories run by the university.’

Since the 1960s, most military research at MIT has been done ‘off campus’. However, in the 1980s, MIT’s ‘on campus’ military research still included work on missile guidance, army helicopters and radar for ‘Star Wars’ projects and, more recently, it seems to have included work on robots, drones and ‘battle suits’ for chemical and biological warfare.

Of course, any research establishment that only did applied science would soon run out of new ideas. So the Pentagon knew it had to fund pure science at MIT and elsewhere if it was to remain the world’s No.1 military machine. One side effect of this was that Pentagon funded research has produced many scientific innovations that still have no military use; this includes Chomsky’s linguistics. But that doesn’t mean that the direction of this linguistics wasn’t affected – especially in its formative years – by the vast military funding of both his own laboratory and of MIT as a whole.

Unfortunately, in another response to my book in the Chronicle of Higher Education, Chomsky appears to dismiss this whole issue by saying that ‘there was precisely zero pressure [from the Pentagon].’ However, it is notable that anti-militarist students at MIT have looked at things rather differently. For example, in 2001, Michael Borucke wrote:

‘Overt demands on a university are not the only way to influence what can and can’t be done here. The very nature of funding sources themselves also limits the scope of research. It is not likely that the [Dept. of Defense] will fund research it can’t use for military purposes. Faculty must necessarily change the focus of their research if they want DoD contracts.’

In 1985, Rich Cowan was equally critical about ‘MIT’s massive military research budget’. He wrote that ‘[university] military research focuses attention and manpower away from areas that do not have perceived military application.’ He then went on to point out that ‘military funding not only affects the size of academic departments, but also the biases [of] research areas explored.’

Chomsky has been at MIT for 60 years, so perhaps it is not surprising that he finds it difficult to view his university with the critical eye shown by these students. But that is no reason for the rest of us not to confront the realities of MIT or, indeed, the realities of Chomsky’s career and its many contradictions. My book is probably the first to attempt this. I would ask anyone fascinated by Noam’s writings, as I am, to give my book a go – even if Noam does dismiss it as ‘complete nonsense’!