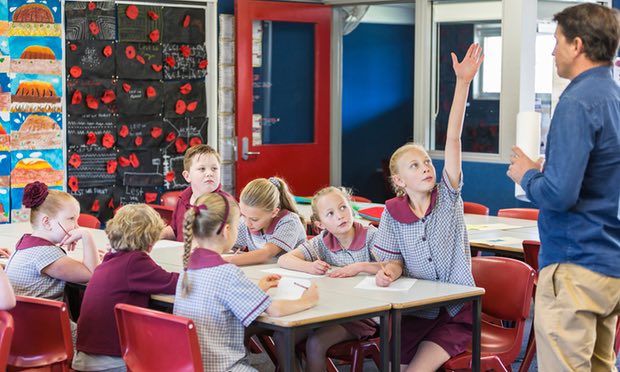 Teachers are dipping into their own pockets and cash-strapped public schools are leaning heavily on fundraising to pay for essential supplies, a new survey has found.

More than 80% of schools are engaging in fundraising and the overwhelming majority say it is important for their annual budgets, the Australian Education Union’s State of Our Schools survey for 2017 found.

The poll, which was completed by 1,428 principals and 7,513 teachers, was released on Sunday as the union ramped up its calls for the government to commit to Gonski school funding ahead of the May budget.

Schools were most likely to use fundraising for computer hardware or software, sports equipment, library resources or textbooks.

One in four used the money for basic maintenance on school infrastructure, while others spent the funds on classroom air conditioning, camps, excursions and playground equipment.

Two-thirds of teachers said their school was under-resourced while three in four believed their workloads were increasing.

More than half of full-time teachers worked more than 50 hours per week on school-related activities, while almost 30% clocked up over 55 hours.

“Teachers and principals should be spending all their time on the education of their students, not working out how many barbeques they need to organise and run to pay for a literacy and numeracy program,” AEU federal president Correna Haythorpe said.

“Teachers are aware of the shortages of resources in their schools, and it is a major concern they feel that they need to pay for basic resources which should be available to all students as a matter of course.”

The education minister, Simon Birmingham, said the federal government was carrying the can on increasing education investment, with commonwealth funding rising 23% in four years while state funding had grown by just two per cent.

“The survey is a union push-poll that was always designed to play politics rather than focus on how we can best support hardworking teachers to drive improved education outcomes,” he said.