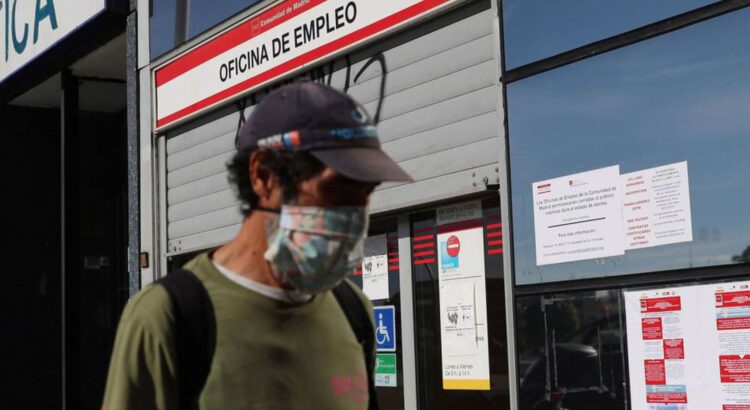 Old habits die hard: Spain is once again the European economy that has shed the most jobs in times of crisis. With the coronavirus pandemic still raging in many countries, job destruction in the first half of the year was nearly three times higher in Spain than in other European countries.

A strict lockdown, reliance on tourism and a high rate of temporary contracts help explain why employment decreased by around 8%.

Old habits die hard: Spain is once again the European economy that has shed the most jobs in times of crisis. With the coronavirus pandemic still raging in many countries, job destruction in the first half of the year was nearly three times higher in Spain than in other European countries.

And this figure does not take into account all the furloughed workers still under Spain’s ERTE scheme, which allows employers to temporarily send staff home or reduce their working hours. Once this state-funded job protection program ends, a clearer picture will emerge of the true impact of the coronavirus on employment. Other EU countries have introduced similar programs to combat the impact of Covid-19 on their economies.

Spanish companies have a very quick and effective way of adjusting costs: temporary workers are immediately laid off or else their contracts are not renewed

Between April and June, employment in Spain decreased by 7.5% according to Eurostat, the statistical office of the European Union. This comes on top of a 1% decline in the first quarter of the year. In other words, the number of employed persons dropped by around 8% in the first half of the year. Figures provided by Spain’s National Statistics Institute (INE), meanwhile, show that the number of employed individuals fell by 1.35 million between January and June.

By way of comparison, job destruction in Germany was 1.4% in the second quarter and zero in the first, according to Eurostat. while in France it was 0.2% in the first quarter and 2.6% in the second. And the United Kingdom only lost 0.7% of its jobs despite a similar drop in economic output as Spain’s.

This can partly be explained by the fact that one in three British workers, or 10 million out of 30 million, are on the equivalent of Spain’s ERTE furlough scheme, based on August data. The UK job-retention program also includes self-employed workers and grants beneficiaries up to 80% of their wages, up to a limit of £2,500 per month (around €2,240). Employment losses were 3.1% in the Netherlands, 4.1% in Austria, 1.2% in Poland and 1.3% in Sweden. Italy has yet to provide Eurostat with its second-quarter figures.

This time is not like 2008, when Spain’s overheated construction sector was forced to adjust to the real estate crash and many jobs were lost for good. This time, the thinking is that the Covid-19 pandemic is a temporary evil and that workers’ wages must be protected until it passes. The tourism sector, for instance, is banking on a return to normal visitor flows once the virus comes under control.

Spain’s ERTE system, which finds inspiration in Germany’s Kurzarbeit, was originally created by former Socialist Party (PSOE) Prime Minister José Luis Rodríguez Zapatero to deal with the 2008 crisis. The scheme gained traction under Mariano Rajoy of the Popular Party (PP) and his 2012 labor reform. And now, Prime Minister Pedro Sánchez of the PSOE has rolled out the job-retention program to stem the tremendous flow of job losses triggered by the coronavirus pandemic.

Yet Spain continues to destroy more jobs than other neighboring countries. Spanish companies have a very quick and effective way of adjusting costs: temporary workers are immediately laid off or else their contracts are not renewed; this avoids problems with the permanent staff but has severe consequences on productivity and the social fabric of the country.

The INE’s labor force survey for the second quarter shows that two-thirds of lost jobs were temporary positions. The job-destruction rate was 2% among permanent employees and 11% among temporary workers.

But there were other factors at play. In mid-March Spain introduced the toughest lockdown in the world, as evidenced by Google’s mobility reports. This confinement triggered a 5.2% drop in economic activity in the first quarter and 18.5% between April and June. Only Britain experienced similar declines of 2% and 20.4%.

Another crucial element is the structure of Spain’s economy. Poland also has a lot of temporary workers, yet it only eliminated 1.2% of those jobs in the first half of the year. But Poland did not take such drastic measures as Spain against the coronavirus, and its economy is not as heavily dependent on tourism and entertainment – two activities that employ many temporary workers and which have been hard hit by the lockdown measures.

Over-reliance on temporary contracts has been a problem in Spain since the system was first used in the 1980s as a way to create jobs. No government has come up with an effective reform: former Labor Minister Fátima Báñez, of the PP, presented a plan that was never completed. And the Economy Ministry’s current plans for a severance-pay system based on Austria’s “backpack” model has been moved to the back burner due to the coronavirus crisis.

And in a recession, temporary workers who are made redundant are also cut off from full unemployment benefits, leaving them dependent on their own families for financial assistance.